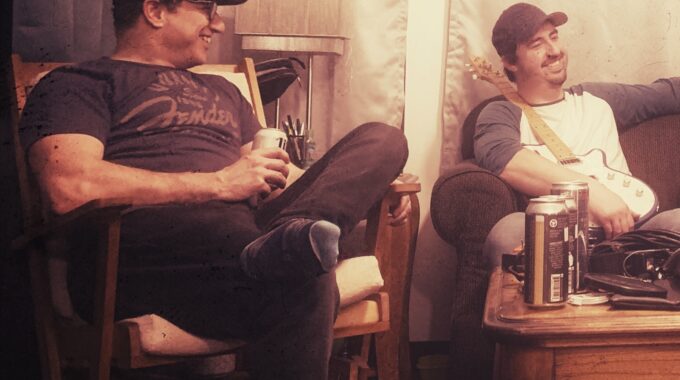 The Story of JJ’s Gang

Over the last three years Aaron Dollimont and Branton Langley have been performing and writing side by side. They are both members of the band, The Streetlights, who released a single on Spotify last year. In the late summer of 2021, Dollimont and Langley released their first album as JJ’s Gang, a lifelong dream come true. Growing up, music was an integral part of both Dollimont and Langley’s life. The experience of putting an album together has been surreal; a happy opportunity to share their own musical legacy, no matter how small. And JJ’s Gang was born.

The two Js in JJ's Gang pay tribute to Dollimont’s late mother, Joan and Langley’s late father, Edison James. Dollimont and Langley attached a mission to their project - have fun creating an LP full of original songs, accomplish it with the aid of their friends/family, and leave a tangible legacy for their family and loved ones to cherish and remember forever.

Dollimont and Langley want to acknowledge the tremendous support provided by the incredible people in their lives, starting with their wives, Joanna and Stephanie. Without their support, patience and dedication, JJ’s Gang would never have come to life! Ron King and Jay Mathews, fellow bandmates in The Streetlights. King lays bass on many of the album’s tracks, which includes a song written by him called "Hang Up". Jay Matthews, self proclaimed ‘World’s Okayest Drummer’, provided his drum stylings on many of the songs. Vanessa Newman of Ness Newman and the Sound, will be sharing her soulful and passionate vocals on "Miles To Go" and other tracks. Tim Dollimount, bassist with Big Talk Sam, also lended his talent. Also joining in the fun are Ava Langley and Alex Langley, along with the accomplished singer Will Brothers. Jillian Dollimont, a profound poet and wordsmith, wrote the captivating lyrics for "Only A Moment". A tribute to her and Aaron Dollimont’s mother.

You always believe the family and friends you surround yourself with in life will be there for you at your lowest moment(s). Aliese is written in first person, and the character becomes consumed in one of these moments. The character no longer possesses the mental strength to conceal, control, and battle their anxiety and mental illness alone. The beauty that arises in these moment(s) is the experience of true intimacy and the purest form of love with the person at your side. Aliese is dedicated to those saviours, or perhaps you are, or will become one yourself!

The Story of You’re a Superstar

JJ’s latest release, “You’re a Superstar”, an upbeat, positive, and inspiring song, was written when a friend of the band’s son became seriously ill and was hospitalized. His courage and strength was so inspiring that the song wrote itself!