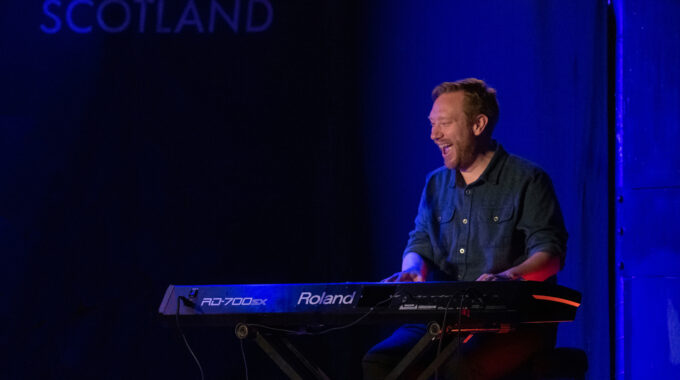 Adam Young is a sought-after pianist from the community of French Road. His unique style adds depth, solidity, and a joyful forward motion to the music.

For the past two decades, Adam Young has been bringing his particular style of Cape Breton piano accompaniment to audiences around the world. Deeply rooted within the fiddle and bagpipe music tradition of the Island’s Scottish settlers, the Cape Breton piano style has evolved over the past century, incorporating subtle elements of jazz and popular music, while still maintaining that unique “Cape Breton” sound.

Adam’s music continues that stylistic evolution⸺his new album, Yearbook (2021), features arrangements inspired by everything from bluegrass to doo-wop, to New Orleans jazz, to 8-bit video games, to modern disco and classical music. Each of the featured compositions was written during a tune-a-day project that spanned from January to December 2018; each was recorded in both a modern and a traditional style for the double album project. While the trad album features more expected arrangements, the experimental versions are a testament to the transformative power of music as an art that connects cultures and generations, blending the past and the present. Musicians from five countries on three continents were involved in this landmark project, with each bringing unique musical elements, each adding their own personal touch. This is an album made for the listener: it’s not about the musician; it’s about the music. It recently garnered Adam a 2022 Canadian Folk Music Awards nomination for Instrumental Solo Artist of the Year.

Adam's previous two albums, with Cape Breton fiddler Dara Smith-MacDonald, perfectly capture the energy, enthusiasm, and integrity of the music. These albums, The Lake Sessions (2017) and Island (2019), were recorded live-off-the-floor in Adam's living room with just the piano, fiddle, and guitar, and were each nominated for Music Nova Scotia awards in the Roots/Traditional Artist of the Year category.

Adam has had a long and varied career in the East Coast music scene. He created and directed the Louisbourg Playhouse’s popular music and comedy revue, Cape Breton Lyrics & Laughter, which has seen over 350 performances since it began 19 years ago. The group garnered an East Coast Music Award nomination in the Roots/Traditional Group Recording of the Year category for a self-titled album released in June 2006. He regularly plays at concerts, ceilidhs, square dances and sessions throughout Cape Breton, and has showcased his talents in Scotland and Ireland, across Canada and in the United States. He can also be heard on recordings by Dara Smith-MacDonald, Colin Grant, Cape Breton Lyrics & Laughter, Eric Angus Whyte, Jason MacDonald and Marilyn MacDonald-MacKinnon. In 2017, he began hosting what would become a series of house concerts at his lakeside home, welcoming artists from across the country, and providing an opportunity for them to connect with a small but enthusiastic and appreciative audience.