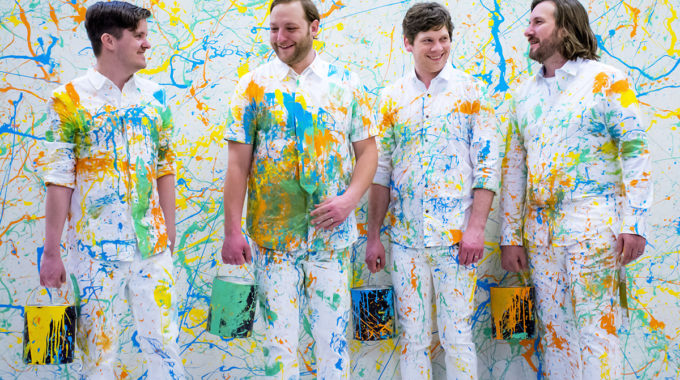 This Halifax based, four piece rock band is known for bringing the Stadium experience to intimate venues and festival stages and creating anthemic melodies that stick in your brain! Over the past decade, they have produced a diverse catalogue of music that attracts Rock and Pop music fans alike.  Alert The Medic are Ryan MacDonald, vocals/guitar/piano; Troy Arseneault, guitar; Matt Campbell, bass; and Dale Wilson, drums.

Their fourth full-length studio album, Let Them Have Their Fun, was released in September, 2017 and the group was fortunate to, once again, partner with Producer, Mike Turner, (co-founder/former guitarist of the multi-platinum band Our Lady Peace and current member of Crash Karma) at The Pocket and Revolution Recording studios in Toronto.

The project involved a new approach to the recording process for the group, as the entire album was recorded “live off the floor” at the renowned Revolution Recording studio with Assistant Engineer Phil Hotz (Arkells/Billy Talent/July Talk).  This method allowed Alert The Medic to capture both the essence and energy of their live shows, creating a powerful mix of their signature rock-infused anthems along with an exploration of some uncharted soundscapes.

The lead single from the album, Corporate Kid, reached #17 on the MediaBase Canada Active Rock Charts, charting Top 20 in Canada, and spent 11 weeks in the Top 30 songs in Canada on the Nielsen BDS Mainstream Rock Charts.

Their 2014 release, The Phantom Moves, also produced by Turner, received two 2014 Music Nova Scotia Award Nominations for Group Recording of the Year and Rock Recording of the Year.  The first single from the album, “Echo And Fade” climbed the MediaBase charts all the way to #20 on the Canadian Active Rock, #30 on the Alternative Rock Charts, and #29 on Iceberg Radio's “2014 Top 40 Songs”. The song made its debut south of the border when it was featured in a SiriusXM montage highlighting the “2014 NHL Plays of the Year”, broadcast live from Las Vegas on the NHL Network, CBC, NBCSN, and NHL.com during the 2015 NHL Awards.

Their songs have been featured on NHL.com and CFL.ca in SiriusXM Ultimate Replay segments and featured on Rogers Sportsnet MLB Central throughout the entire 2014 Postseason and during the 2014 and 2015 World Series!

In 2013 the group performed to a National audience, live on CTV’s Marilyn Denis Show.  Their single, “The Weatherman Pt. 2” was featured in an episode of Global TV’s hit police drama, Rookie Blue and was the feature track on the Canada International Film Festival Award winning production “William’s Lullaby”.

We, the weapon was Alert The Medic’s follow up to their 2006 Self-Titled debut album. The first single off the Self-Titled project, "Reported Missing", climbed to #1 on the East Coast Countdown radio show and gained the group national attention.  The album garnered 2008 Award Nominations from both the East Coast Music Association and Music Nova Scotia, including CBC’s coveted Rising Star of the Year.

“The new material is very strong and with it the band continues to develop their signature sound, going from strength to strength. The new songs reveal a continuing maturity in their writing and musical identity.”

“Let Them Have Their Fun is an unexpected rejuvenation of Alert The Medic’s sound that no one saw coming. The first climb of the opening track, ‘What Are The Odds’, propels the band to the top of a mountain, of which they refuse to come down from for an elating 42 minutes.”

Let Them Have Their Fun Album Review, October 2017

“The pinnacle of the album has to be “Corporate Kid”.  The hard rocking first single off of the release has been in rotation across the country in anticipation of the CD.  Its quick climb up the charts should indicate just how amazing this song (and album) is!”

“Alert The Medic (ATM) has earned a reputation as one of the most compelling live rock bands on the East Coast.”