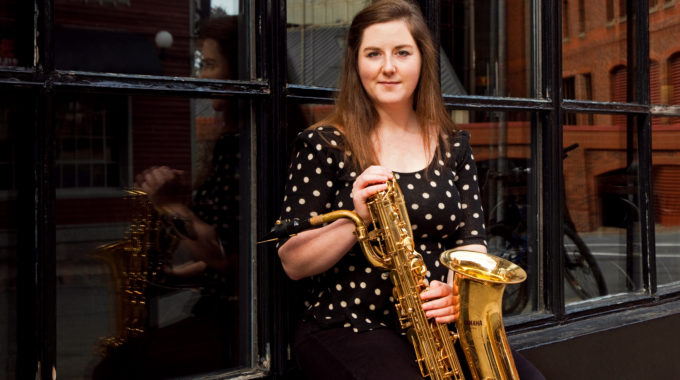 Ally Fiola is a saxophonist and screen composer based out of Nova Scotia, Canada, who is currently studying and working as a composer out of London, United Kingdom. Ally self-manages her band, The Next Quest, a jazz combo that is influenced by soul and brass bands, but with a modern edge. Ally showcased at the 2019 East Coast Music Award's Jazz Stage, and was nominated for the Halifax newspaper "The Coast'" best jazz musician. She was also nominated for the 2019 Music Nova Scotia Jazz Recording of the Year for her debut album, Dreaming Away. This album was released on July 26th, 2018, and was made possible by being the recipient of the 2017 Dream Hughie Award.

Ally has also been a sideman in successful groups such as Salty Dawgs Brass Band, Bluesmobile, Scott n' the Rocks, the Tuesday Night Big Band and other groups across the Maritimes, has performed and recorded with Unidentified Funk Object (ECMA Nominee 2017), and has been part of Jerry Granelli's Globe Blues Band. Ally has also taken part in the Halifax Creative Music Workshop led by Jerry Granelli, which included workshops by guitarist Bill Frisell and trombonist Julian Priester. She most recently was part of the 2019 Winter Musicians in Residence at the Banff Centre for Arts & Creativity where she worked with the Quasar Quartet and musicians from across the globe.