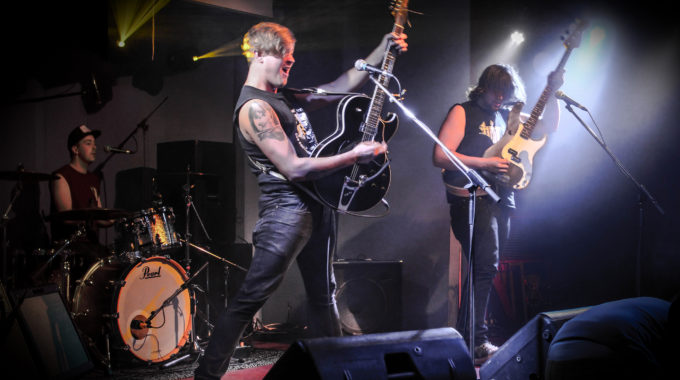 Andre Pettipas and The Giants

Sing along anthem songs with ear worm hooks that will reel you in and release you into a musical wave of vintage grease coast rock n' roll attitude combined with 90's rock/pop sound. Summer 2016 was a busy summer. The band toured the east coast of Canada in support of their debut album, "Stay Gold." with multiple festival stops including Granville Green (Port Hawkesbury), Jubilee (New Glasgow), Music Mountain (Thorburn), Parlee Beach Music Festival (Shediac, New Brunswick), and an opening slot at the Meghan Trainor show in Port Hawkesbury to name a few. During this time they grabbed a number 1 single on the East Coast Countdown with their hit, "Long Way From Home" ft Ashley MacIsaac. The band were also finalists in the Casino Nova Scotia Artist In Residence competition. The remainder of 2016 consisted of gigging throughout the maritimes and writing new material.

The boys kicked off summer 2017 in overdrive placing first in a contest that had over 100 bands who applied, 18 semi-finalists, 3 finalists and 1 winner for the q104 Homegrown challenge. Prizes include $5000 in artist development (Groundswell Music), $5000 in recording (Coda Pop) and $5000 in musical equipment. Although the band has only been together for two years they are no surprise to the music scene as they have been avidly performing in previous bands for much longer.

During this time the band will be working on pre production for their follow up album which they will start recording in the fall at Codapop with Jon Landry (The Stanfields) and the team at Groundswell Music. There is only one word that comes to mind when you see  Andre on stage… showman. Musical talent aside this young man has presence that is reminiscent of a young Brian Setzer, working the stage and the room with an irresistible charisma. It’s not all theatrics with these boys though, they do have the musical chops to go with it." - B Lynn Hartling//Canadian Beats