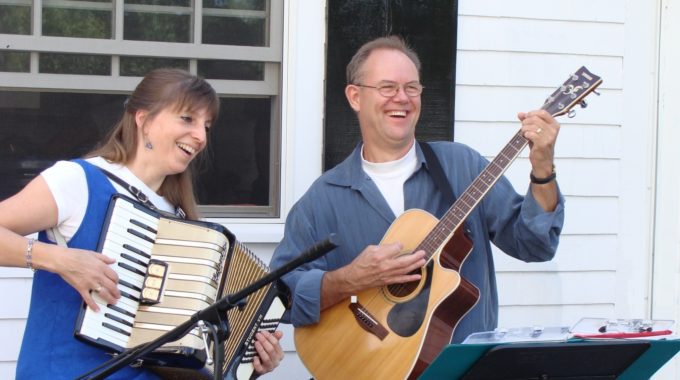 Donna Rhodenizer and Andy Duinker are the world-class, international performing duo, Donna & Andy. Their musical excellence has been recognized with a Juno nomination and multiple ECMA awards. Donna & Andy have performed for over 700,000 audience members in 1500 performances throughout Canada, entertaining children and families with an interactive musical performance using fiddle, accordion, keyboard, guitar and even a Newfoundland Ugly stick. Their signature vocals, instrumental diversity, comedy, and lots of audience participation guarantee an enjoyable performance for all.

Donna & Andy made their international performing debut as Artists in Residence at the Canadian International School of Hong Kong for four weeks in April-May 2014. Their residency included performances for the students at the school, daily classes with the students, presenting their own original music and music of the East Coast, preparing a concert presentation for the school’s Arts Festival and workshops for teachers.

Donna & Andy have five recordings for children all of which have received multiple provincial, regional and/or national nominations and awards:

Donna & Andy are consummate performers, musicians and educators devoted to the presentation of top-quality music. Their original songs delight young audience members and are embraced by teachers who are able to use the songs in their classrooms via teaching resources and printed songbooks of Donna & Andy’s music. Donna & Andy have published over 50 original songs in five song collections (including two publications with French lyrics) and 30 individual titles for choirs. Over 50,000 Donna & Andy CDs, 5,000 songbooks and over 30,000 copies of single sheet music of their original songs have been distributed across Canada and around the world.

Donna & Andy's new website launch includes a membership program designed to help kids continue to sing while at home or in school. https://donnaandandy.com/