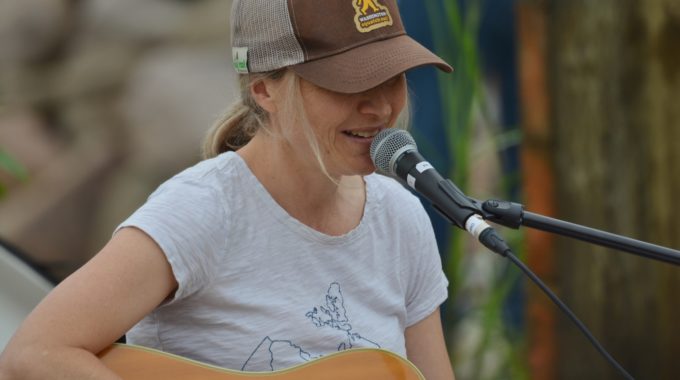 A native of south-western Ontario, Ashley Moffat – Little Miss Moffat – spent some years touring from Windsor to Toronto and back promoting her rookie E.P., “Midnight Messages”(1999). Incredibly drawn to the Halifax music scene, Ashley migrated east to Nova Scotia in 2000. Little Miss Moffat joined forces with some Halifax musicians and put together the eye opening E.P. “Oh, Come Off It!”(2001). It gave Moffat some solid footing in the local music scene.

Her follow-up LP, “Miss Canada”(2003), was recorded at the Mullet and was co-produced by Joel Plaskett. It featured Joel, Gabe Minnikin, Benn Ross, Lukas Pearse, Mark Bragg, Dale Murray and Brent Randall. “Miss Canada” had a warm sound and rich textures and was a snapshot of a time when the Khyber was the place to see live music and the Mullet was the place to record albums. “Miss Canada” earned Moffat an ECMA nomination and more credibility as a Canadian songwriter and live performer.

Ashley Moffat has a passion for nature and Children's Music and also spins catchy nature tunes for kids of all ages. Co-founder of the Wilderbeats (2000-2008), Ashley joined forces with Joyce Saunders and released "The Wilderbeats Live" (2001) and "Second Nature" (2003), both of which received NS Music award nominations.

Ashley kept the quirky folk tunes going with her 2011 release "Wild About Nature" (winner of 2012 NS Music Award and nominated for an ECMA). “Wild About Nature” (2012) is a solid blend of Moffat’s quirky and catchy nature tunes about sea cucumbers, bats, owls, beavers, and even pandas. Produced by Benn Ross, the album features the likes of Benn Ross, Old Man Luedecke, John Parker, Clive MacNutt, Joyce Saunders, and Joel Plaskett.

Ashley is excited to announce her soon-to be- released "Habitat" album which was recorded at Greg Keelor's (Blue Rodeo) farm this past winter by Greg himself and James McKenty. Graced by such players and Jimmy Bowskill (The Sheepdogs), Benn Ross (The Negligents), Mike Boguski (Blue Rodeo), and Melissa Payne, and this album is as much a folk album for adults as it is a nature album for kids. Featuring songs about Nighthawks, Narwhals, and Sasquatches, this album promises to please kids and parents, David Suzuki, and Mother Nature