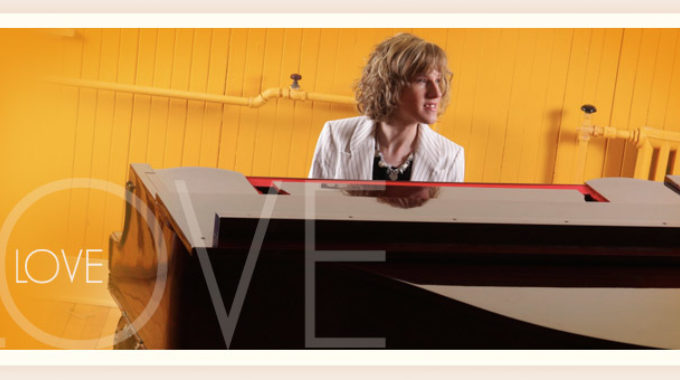 Becka deHaan's style is described as "a traditional yet soulful, spirited sound." Blending her classical background with black and bluesy influences such as Eva Cassidy, Patty Griffin and Maria Maldaur, and country-pop influences such as Susan Ashton, she produces a unique offering of both original and cover material on piano and voice, on flute and harmonica--an offering that has moved audiences to tears and roused them to standing ovations. Becka was playing piano before she could walk and singing as early as age four; a toddler photograph reveals her sitting, totally still, by a stereo, listening intently. Now performing under her mother's maiden name of deHaan, she was born Rebekah Joy Thiessen in Winnipeg, three months prematurely on July 11, 1984, depriving her of all eyesight but light perception at two months.

Her parents moved to St. Stephen, NB in 1985, where they raised her, along with her two younger siblings. Upon high school graduation in 2002, Becka received her certificate of Grade 10 Piano from the Toronto-based Royal Conservatory of Music, and in 2006, she graduated from Canadian Mennonite University in Winnipeg, with a Bachelor of Arts degree majoring in Biblical and theological studies and minoring in English. She returned to New Brunswick and from there has carried out her career: After performing for National Child's Day at the Senate in Ottawa in the fall of 2008 and at a Canadian Social Forum in Calgary the following spring, she went on to win the Canadian National Institute for the Blind's first annual national iFactor competition, earning her the opening slot for Juno nominee, Terry Kelly, in concert in Winnipeg, in the fall of 2010. From 2008 to 2011, she was keyboardist and lead female vocalist for Fredericton's showband, Vinyl2Bits, and in June, 2014, she opened the inaugural East to West Festival in Shediac, NB, whose headliners included Jeremy Camp, The News Boys and Third Day.

March 2010 saw the release of her debut, full-length album, “Wait for the Wind”—an album showcasing deHaan’s talents as a vocalist, instrumentalist, composer and lyricist. It has earned nominations for 2010 Spiritual Recording with Music New Brunswick, for a 2010 Covenant Award--Inspirational Album of the Year--with Gospel Music Association Canada, and for a 2011 East Coast Music Award-Gospel Recording of the Year. A review of “Wait for the Wind” is here.

Her second album, "Long-Awaited, Unexpected," was released in October, 2012--a Christmas album highlighting her development in performance, writing and arranging, with original reflections and arrangements of traditional carols. It received award nominations with Music New Brunswick (Roots/Folk Recording) and with Gospel Music Association Canada (for 2013 Covenant Awards, Seasonal Album of the Year, and the record's closing track, "The Baby on the Hay," for Seasonal Song of the Year), and in April, 2014, the album was awarded the East Coast Music Award for Gospel Recording of the year. Becka continues to write, and she performs regularly throughout New Brunswick and beyond. A review of “Long-Awaited, Unexpected,” is here.