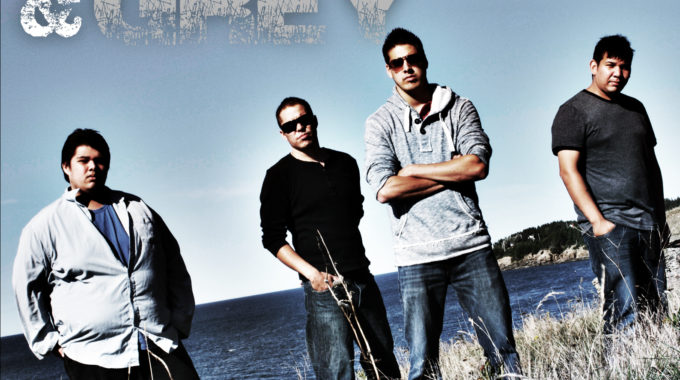 Black & Grey is an new and up-coming artists coming from Cape Breton, Nova Scotia. They have powerful lyrics and easy listening music that are hitting home for a lot of their fans. They have had songs playing on major radio stations for about a year now. They filmed a music video at Sydney Academy using students from the school for their anti-bullying song called Goodbye Misery. They have a total of 50,000 youtube views of their two single releases Goodbye Misery and What Makes You Who You Are, that are available on iTunes. They have recorded all songs at Soundpark Studio's with non other then multi-award winning Producer/Engineer Jamie Foulds. They have released an EP in January 2014 of their highly anticipated self titled album Black & Grey. With Singer/Songwriter Brandon Johnson performing for about ten years as a solo artist, has been working with a group called Mi'kmaq Nation performing for an audience of over 10,000 people at the Halifax Commons. He was also a guest on APTN's The Candy Show last year performing his single I'll Never Forget with co-writer Blake Francis, and taking part in a Songwriter's circle with Gordie Sampson for three years. He then started writing songs with one of his close family members Mike Mellen now Lead Guitarist/co-writer. They have been working together since they were teens, and decided to form the band they are today with help from the big bass lines provided by Tyler Mellen, and the heart and soul of the band Blake Christmas on drums. They have Headlined the Giant 101.9 Monster Ball at the Joan Harris Pavillion and sold it out to 1000 people. They have performed at a lot of charity events including the Autism Rocks and IWK Telethon in Sydney. They also played the QMJHL Screaming Eagles home opener at Centre 200, and the ECMA's PEI 2014 at the APTN Aboriginal Showcase and made some waves in the industry with lots of doors opening up for them. Their new release Just hit iTunes October 1st 2015 called Pretty Little Nightmare