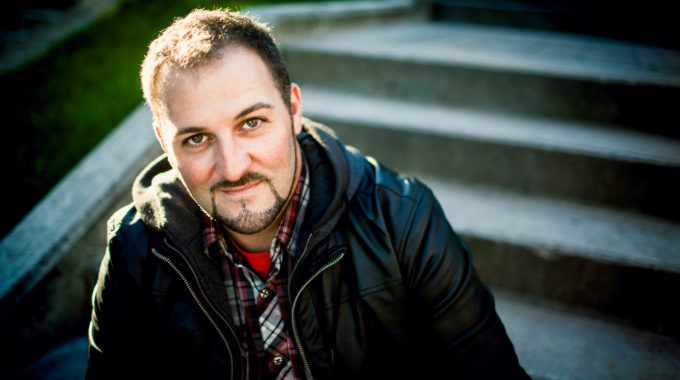 Blair Lane - When Life Gets In The Way Of Living
https://www.youtube.com/watch?v=DqFtq-xA_jY
BUY MUSIC

Destiny is a lot like thunder – it growls in the distance for a while but sooner or later it rears up and rattles the foreground, demanding to be heard.

That may seem like an oddball analogy, yet anyone who doubts its truth need only consult Blair Lane. He knows all about unseen but palpable forces that refuse to be silenced.

Lane has spent his entire life making music in one form or another, first as a drummer, then as a bassist and guitarist, and later, as a music student at a distinguished stateside university before arriving as a gifted and highly versatile singer/songwriter and independent recording artist.

Still, it’s only been in the last few years that music has become Lane’s imperative; the obvious path he must follow despite being a dedicated family man running a family business with all that those duties entail.

As the affable Lane is discovering, sometimes it’s easier to just surrender to destiny, even if it’s a hugely ambitious – even scary - thing to do. “I do occasionally ask myself ‘What am I doing,’” he chuckles. “But I have to.

“I have no other way to explain it except to say that I just keep coming back to music. So I can completely ignore this thing and be unfulfilled or I can keep working away.”

Luckily for fans of Lane’s two albums to date – 2009’s gospel-goosed Only One and 2013’s twangy, countrified When Life Gets In The Way of Living – the Newfoundland-based musician found resistance to music futile. Not coincidentally, he also discovered that his particular calling permits him to connect with people in profound ways.

“Especially live,” he confirms. “I’ve had people come up to me after shows and say this or that song really inspired them. By sharing my story, other people get a sense that they are not alone in things.”

Written at home and recorded mainly in Nashville alongside long-time co-conspirator/producer Peter Daniel Newman and ace Music City session hands who’ve recorded with everyone from Tim McGraw and Brad Paisley to Keith Urban, Only One and When Life Gets In The Way of Living neatly chart Lane’s songwriting evolution. The recordings also point, compass-like, towards what’s next.

“A lot of people see me as a gospel artist. And I do love to sing it in the right venue,” says the (literal) son of a preacher man who grew up hopscotching from one small Newfoundland town to another, taking music with him everywhere, sometimes teaching classmates so he could have others to practice with.

“My second record was me trying to find out where I fit as an artist which explains why there were several genres there, from country to pop. But for the next record I hope to establish myself as a country artist. I think that will come in my writing.”

He continues: “I am not overly interested in writing a bunch of drinking songs. Family is where I am at right now so I expect my songs will reflect that. And there will be some fun tunes, too.”

Lane allows that his deep connection to the church, with its tradition of testifying and sharing life stories, permits him to leverage the kind of universal themes that earmark the very best country music, the kind he grew up listening to and loving. Proof of that can be seen in his impressive achievements so far.

The title track from Only One placed in the top 10 in the gospel category of the 2009 International Songwriting Competition and the top 30 in the songwriting competition of the Gospel Music Association of Canada.

When Life Gets in the Way of Living was nominated for Music NL’s 2014 Country Album of the Year award and was quoted heavily on local country radio.

On the strength of those albums, Blair has twice showcased in Nashville – at American contemporary Christian artist Michael W. Smith’s Rocketown venue, and at an inner-city church at the behest non- profit cultural outreach organization Extreme Tour, in both instances to acclaim. His credentials as a performer at home in Newfoundland are similarly sterling.

Even more resonantly, though, Lane has anecdotal proof that his highly personal and finely crafted songs drive home powerful messages. Take the poignant, plain-spoken 'Pretty Buckle,' which chronicles his Mom's struggle with cancer or the dart-to-the-heart title track from his second album.

“I had a Facebook message one day from an old school friend in one of the small towns we lived in for about a year. This woman explained how she and her husband had six kids but her husband was a workaholic. She heard the song ‘When Life Gets in the Way of Living’ and became very emotional.

“She later played the song for her husband and he cried. That song actually changed him... he started making an effort to be more present in the family, to show up for dinners. And for me, that’s what it’s about - being able to sneak into someone’s life with what I’ve been given.”

Of course, the married father of three – ages nine, 12 and 13, the oldest having arrived when Lane was just 21 - knows first-hand about life getting in the way of living, of being distracted by things other than life’s acknowledged essentials.

Add to that his remote geographic location – where professional development opportunities like songwriter camps are a flight or ferry ride away – and the years can swiftly tick by.

But Lane is laser-focused on his future as a musician and on his next record. He and producer Peter Daniel Newman already have a writing trip to Nashville in the calendar. “I don't just want good songs,” he says. “I want great songs.

“I just wasn’t in the right place until now,” Lane adds. “I was busy with life - in university, very wrapped up in the church scene, working summers at tree planting, then in a gold mine and after that came the opportunity to have an independent business. Then Pam (wife Pamela Newhook) and I started our family.

“My first two records let me focus on the singing and songwriting. I have come to realize I need to focus on the industry side of things, too. No matter how great a record is – even though the songs are the most important thing – it’s still not just going to happen.”

One thing’s certain: only a fool would bet against Lane... and his destiny.