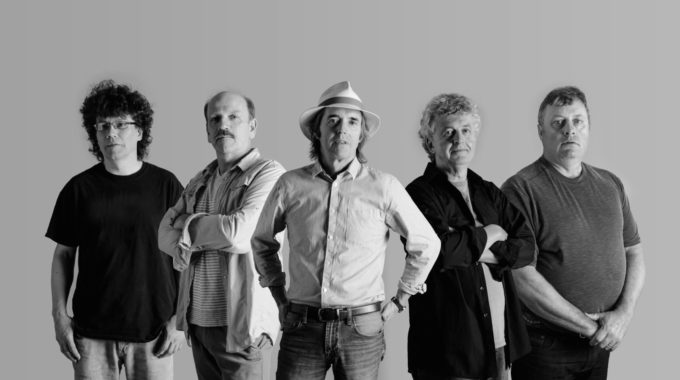 The Blues Merchants continue an East Coast tradition of rockin' the blues with a unique combination of great original songs and solid blues standards. This group of Cape Breton musicians have a ton of experience making music for nearly two decades.
Sharing the stage with contemporaries Matt Minglewood, Sam Moon, and John Campbelljohn, opening shows for Colin James, Kim Mitchell, Guy Davis, and others Canadian rock icons, this band is tried and true. With past performances at Stanfest, ECMAs, the annual Christmas Daddies and IWK telethons, plus gigs thoughout the region and every venue on Cape Breton Island, the Blues Merchants always bring a special spirit and energy to the stage.
Ian Aker, (vocals, saxes, harp) Fred Lavery, (Bass, electric guitars) Bruce Timmins, (lead guitar) Brian"Moon" MacInnis, (Drums) and Mark MacQueen, (Keyboards) are the "Blues Merchants".
=========================================================
Previous ECMA nominees in the Blues category for their debut self titled CD release in 2001, the Blues Merchants have recently recorded at the award winning Lakewind Sound Studios with producer Fred Lavery and bandmate Ian Aker to release their new CD titled "Davis Street" in January 2016. The Blues Merchants are pleased to have their new CD nominated as Blues Recording of the Year at the 2017 ECMA awards in St John NB and will showcase at the event that weekend. "Davis Street" is dedicated to the memory of the late Dave McKeough former lead guitarist with the band and his wife Donna, who were killed in a tragic car accident in 2012.
Plans are being undertaken to hit the Maritime Festival circuit in 2017 to promote the new CD with plans to explore markets further afield in the near future.