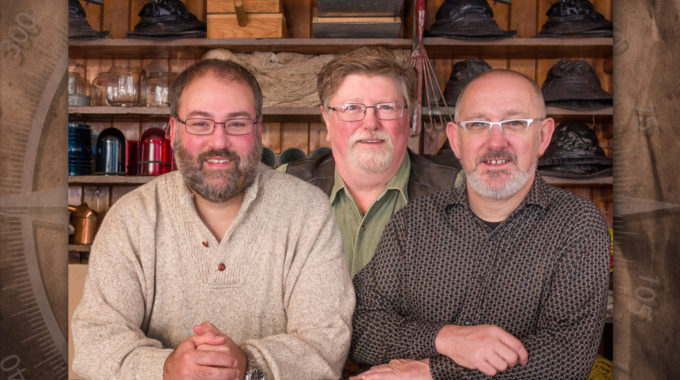 An institution in the Maritimes for over 35 years, McGinty has been a fixture on the East Coast music scene entertaining both pub and concert audiences alike with a blend of Celtic-influenced ballads, traditional, folk and bar tunes.

The band’s current line-up includes founding member Don Moore, bass player and vocalist Joe Breen, who joined the group in 2011, and singer/songwriter Roger Stone who came on board in 2012 and is equally skilled at both guitar and 5-string banjo.

McGinty was conceived in 1977 when original members Moore, John Ferguson and Dave Hickey came together in Halifax, Nova Scotia. Over the years, the group established itself as a mainstay on both the pub and outdoor festival scene.

As ambassadors for the Maritimes and good times, McGinty has performed from coast to coast in Canada and the U.S., and to audiences in the Arctic, Iceland and Ireland.

The band has shared the stage with some of the legends of folk music including The Chieftains, John Prine, The Kingston Trio, Liam Clancy and Tom Paxton.

Anyone who has seen the group live knows the energy, musicianship and sense of good cheer they bring to the stage. They have a way of making the smallest pub feel like a concert or the largest festival feel like a kitchen party.

The band’s original line-up played together for 33 years until Dave Hickey’s untimely death in 2010. McGinty suffered another loss in 2012 with John Ferguson’s sudden passing.

The new combination of members has resulted in the band keeping its sound fresh and performing more original music in addition to the traditional and contemporary favourites McGinty is known for. The current line-up recorded the group’s ninth album in 2013, 44° North.

The McGinty legacy is carrying on with the band looking forward to many more years of entertaining fans - old and new.