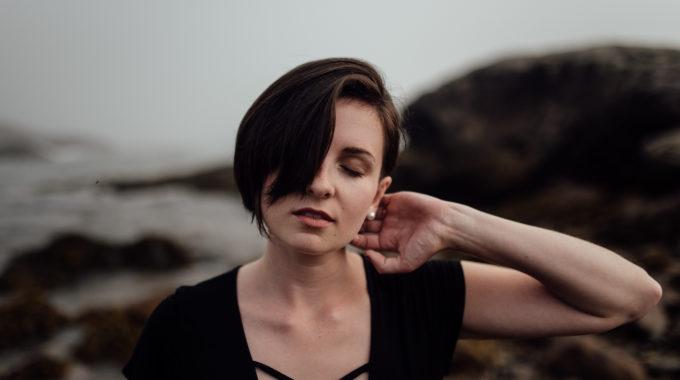 Brittany McQuinn is a Canadian East Coast singer/songwriter. She was not raised in a musical household and her early influences include film and video game soundtracks. Growing up in Fredericton, New Brunswick, Brittany chose to be involved in as many musical activities as possible. She began writing songs when she was 6, requesting that her father bring home blank cassettes from the studio where he worked so that she could record them. She has now written over one thousand songs.

Competing against over 60 other artists from the East Coast of Canada and the U.S., Brittany reached the top 10 at the New Brunswick Talent Search competition in September 2015. She released her first album, From Basements To Rooftops, in October of that year.    Brittany showcased at Canadian Music Week in Toronto May 2016, and in September won a Toronto Independent Music Award for "Best Out of Province." Shifting into synth-pop with her new EP, Bold focuses on facing difficult emotions and shedding societal pressures and expectations. Honest songwriting and unique style struck a chord with blogs across the world, particularly her song Sudden Stop:

"Upbeat-sounding 'Sudden Stop' is not so upbeat because it talks about light and darkness, a lack of simple solutions and black thoughts, some of the darkest thoughts that have possibly impacted all of us."

"Pop music has the reputation of dealing with fun issues, or when it is sad, they are romanticized to make it lighter. [Brittany] decided to deal with the topic of suicide in 'Sudden Stop....'  A hard issue that is somehow taken more lightly thanks to its perky production with still keeping it uneasy for the listener."

Brittany identifies as a mental health advocate and emphasizes the importance of mental health both on social media and during live performances. She opened for k.d.lang at Casino New Brunswick during her 25th Anniversary Ingénue Tour September 7th. Bold is produced by Canadian East Coast producer Daniel James and released as a full EP September 8th.