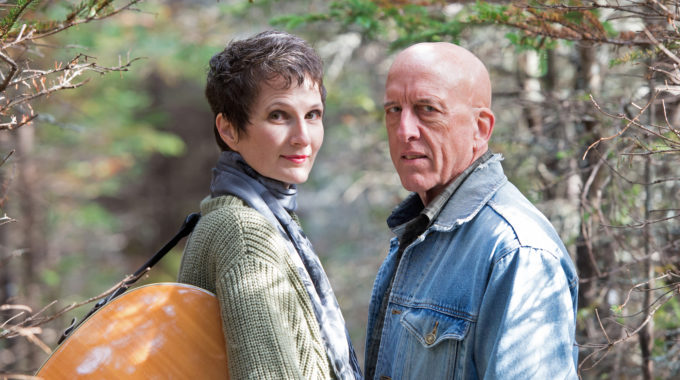 "They don't try to sound like kids in their music though; no hip-hop or electro beats, instead they do what they love, which is a warm folk and pop sound, heavy on the melodies, harmonies and easy-on-the-ear playing." - Bob Mersereau, CBC, East Coast Music

Fresh off their 2nd Euro tour, Spring 2017 tour in Germany, Belgium & Netherlands, Campbell + Green and are now recording a 5th album. This will be their 3rd collection of original songs. Robert + Cailin are a duo of talented musicians whose vocal harmonies and honesty captivate audiences with their warm and relaxed on-stage presence.

Robert + Cailin's thoughtful songwriting is a contemporary folk/pop style with a touch of traditional blues, country and light rock, range from happy to powerful to poignant.

Their recent album, “When One Door Closes”, spans the deep roots of life experience these two share, with moments that most of us can relate to in our own busy lives. Not your average duo, this couple is going against the odds in the music industry, forging paths traditionally paved for young up-and-coming stars. Both 50 something, they have taken on the world, made the leap, and are following their passion and love of music.
Website: www.CampbellAndGreen.ca

Robert hails from Edmonton, Alberta, where he discovered piano and organ at a very young age. In his early professional days, he has had the pleasure of touring with a number of first rate country musicians such as Rocky Swanson, Patricia Conroy, Susan Jacks, Buddy Knox, and Rick Tippe. In later years, Robert played in the Vancouver area doing pop, blues, R&B and country with other artists and as a solo act. In recent years, he has really come into his own, writing and performing with his wife and partner, Cailin Green. He still plays country and blues occasionally with East Coast artists such as John Campbelljohn, Kevin Davison, Nathalie Ladoucer and Andrew Frelick.
personal website: www.RCampbell.com

Born in New Brunswick, Cailin has lived in several places across Canada while growing up and began her singing career at an early age in Montreal. Originally trained in choral groups, she went on to study voice with various teachers over the years, experimenting with different genres and performances.

Cailin has appeared in numerous musical theatre productions, choral works, concerts, and music reviews, both solo and with bands. She has also studied guitar, piano and percussion, acts and dances, and has directed and produced several musical productions and plays for community theatre.

In more recent years, Cailin has turned her attention to songwriting and performing with her husband and partner, Robert Campbell, as well as producing fine art which can be viewed at her personal website: www.cailingreen.com.