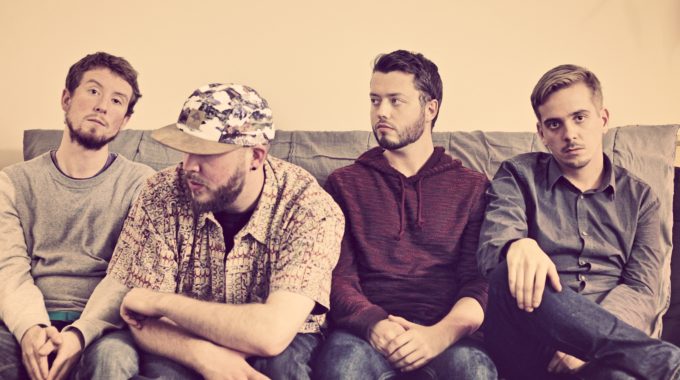 St. John's, Newfoundland is not generally perceived to be a hotbed for Hip Hop music and culture. However, the last few years have seen the development of a burgeoning scene with some young talent, all of whom are waiting for that first act to open the door to the national level. Amidst a surplus of punk rock and metal shows, it was a great fortune that ChessClub, all long-time friends in different capacities, came to develop similar enough artistic interests to form a group together. The group consists of vocalists Matt Murphy, Andrew Lahey, James Piercey and producer Adrian Gagnon. Part of what makes ChessClub such an interesting package are the individual interests of each member, and how they amalgamate into a single unit. Matt has dipped his feet into the King of the Dot (KOTD) battle rap circuit, gaining some notoriety for his complexity and his eccentric style. Andrew grew up performing as a singer in an array of musical genres, involving himself with various vocal projects. He released his debut solo LP, Live from the 32nd Floor, last year under the name AndrewLIVE. James is an enthusiastic reader of fiction, and is currently working on a collection of short stories entitled Prayers (and other short stories). Finally, the group's producer Adrian is also a member of the electronic trio ev ree wuhn, and owner of Brightmind Music, an established music licensing company. While each member takes passionate interest in their activity outside the group, of equal importance to each are the lessons they learn from their independent projects and how they enhance ChessClub.

Since its official formation in 2008 (originally under the name Large LIVE n' Direct), the group has shared the stage with a range of internationally notable Hip Hop acts including Pharoahe Monch, Shad, The Beatnuts, Slaughterhouse, Madchild and Belly. After building a resume of over 100 live performances throughout Newfoundland, the group migrated to Toronto in 2010. Since then, they released a critically acclaimed EP entitled When It Rains (under Large LIVE n' Direct), featuring 9- minute video “Fall”. Following this release, they received acclaim from Alan Cross, Exclaim! and a range of music blogs, along with being deemed by AUX as among the “7 Canadian rappers you need to hear”.

According to ChessClub, the climate in contemporary Hip Hop is simultaneously exciting and troubling. On the one hand the genre’s boundaries are expanding at a rapid pace, allowing artists to pursue new directions and still gain recognition. On the other hand, the ability to gain attention online gives greater exposure to gimmick-based artists who sacrifice substance and integrity for short-term notoriety. One of the fundamental principles of their mission statement is to capitalize on the post- modern trends that are pushing the genre in new directions. The group wishes to continue the movement to expand the range of the genre. However, instead of relying on irony and self- deprecation, they opt for a sincere and emotional approach to some universal subjects that are seldom touched on in rap music, such as heartbreak and isolation.

With influences ranging from J Dilla and Stevie Wonder to Mos Def and Woody Allen, ChessClub has developed a highly diversified sound which has attracted a wide range of fans. The group has been praised for their energetic live performances featuring a full backing band. The live band enables the group to expand their textural range while maintaining an organic feel during their performances.

On September 23rd, the lead single “Half/Dead” was released, accompanied by a music video produced entirely by the group. The group's debut LP as ChessClub was released via Noisey on Dec. 10th, 2014.

ChessClub is currently cultivating their next project slated for an early 2016 release.