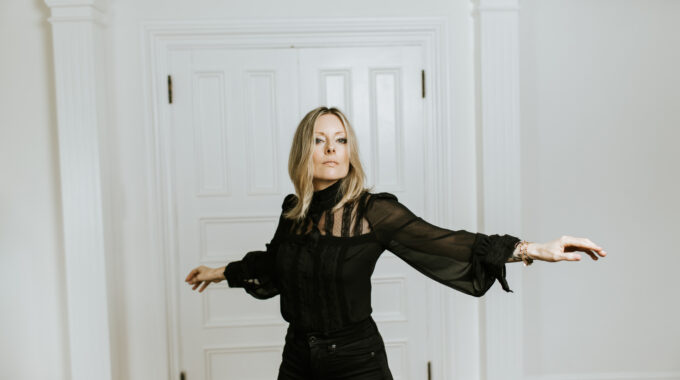 They say the mark of fine songwriting is when a song feels like an old favourite on the first listen. With Christina Martin, you can find an album full of tracks that feel like time-treasured classics, and brand new singles that feel like the song you got married to. Sharp as a razor and shining like silver, her songs blend the relatable and personal, painting portraits of love, loss, tragedy and redemption to soul-stirring effect. Her music dances effortlessly through Pop, Rock, Folk and Americana traditions but stays deftly unchained by any one label, refusing to be pigeon-holed and unafraid to dip into stranger waters. The hooks hook, the hits hit hard, the words stop you dead and the music demands to be heard. Seven albums in with an eighth on the way, Christina Martin’s music is there for anyone who’s felt up against impossible odds, yet refused to lie down.

Raised on Canada’s East Coast, Martin’s musical journey began in the summer swelter of 1999 when she moved to Austin, Texas to work as a nanny. A lost soul who’d never picked up a guitar, the young Martin found herself swept up in the rock bars, dizzying distortion and guitar-toting prophets of the Live Music Capital of the World. After a turn as supporting vocalist/dancer in Austin high-energy whiskey-drenched rock band Young Heart Attack, Martin launched her solo career in 2002 with an opening slot for Wilco and her debut album Pretty Things. An Austin-inflected acoustic album on the surface, Martin’s taste for the sharper things reared its head even then. From the emotional strings on the title track to the gut-wrenching lyricism of ‘Harsh Words’, it’s no surprise two of the songs featured in award-winning drama TV drama series - Sex Traffic (2004) Snakes and Ladders (2004).

With second album, Two Hearts (2008), things began to kick up a notch. The louder, prouder sister of Pretty Things, it’s an album that is at once delicate and determined. Tender musings on love letters and romantic bike rides over acoustic guitars and subtle strings, with a rocker’s desperation for volume bubbling under the surface like a magma chamber ready to burst. No surprise the album won Martin considerable attention as an up-and-coming artist. The heart-pounding single You Come Home featured on teen drama series The Best Years, whilst the album earned a 2009 ECMA for Pop Recording of the Year, two 2008 Music Nova Scotia Awards, high-profile shows with rock icon Matt Mays, a string of nominations as long as an interstate highway and even royal approval with a performance for Queen Elizabeth II.

Third album I Can Too (2010) saw Martin unleashed, more dark, honest and raw than ever before, grappling with the themes of fractured relationships. From a collaboration with Blue Rodeo’s Greg Keelor on her rendering of Andrew Sisk’s Subject To Change to the blossoming electric stylings, it earned rave reviews across the board. It’s a rousing theatrical ride from the countrified swagger of the opening track, through the Springsteenian sprawl to the bittersweet acapella outro. It scooped up multiple East Coast Music Award Nominations, toured Canada with the mighty rock act Cuff The Duke, and toured independently across Germany and The Netherlands. Martin has always been an artist who held honesty at her heart, with a determination to speak a universal truth. So in 2011 Martin took the bold step of building her own record label, Come Undone Records, and dived into building a fanbase with community-based projects. Believing that connection with the audience is key, Martin bucked the wisdom of the time by playing a string of small, intimate concerts, performing songs from the first three albums as stripped-back acoustic versions. This led to the live album A House Concert (2011), showcasing Martin’s songs at their most tender, earning a nomination at the 2012 East Coast Music Awards for Folk Recording of the Year and raising funds for the Canadian Mental Health Association.

However, it was 2012’s Sleeping With A Stranger, Martinʼs fifth award-winning album, that marked a real coming-of-age change in Martin’s writing. Confident, lavish, and lathered in rock-and-roll guitars, “It's one of those rare albums where you have to listen to it all in one sitting. Like a good book that’s hard to put down.” (Americana UK, October 2012). Riffing effortlessly through Americana styles, narrative portraits and Bowie-esque genre play, it’s the sort of album that evokes images of speeding down a highway towards a blood red sunset. The sum of Martin’s experience to that point, spiced with new influences and bursting to break free. Its accolades include the 2012 Music Nova Scotia Female Recording of the Year Award, three East Coast Music Award nominations, and a Music Nova Scotia Company of the Year nomination for Come Undone Records. The harmony-drenched summer bop What I Always Knew was placed in the CBC television drama Heartland, whilst the triumphant brass anthem Falling For You remained on the CBC Radio2 Top 20 countdown for five months.

This drive towards community also led to a yearlong residency through Geriatric Medicine Research (GMR) at Dalhousie University and The Canadian Dementia Knowledge Translation Network (CDKTN) in Halifax. Sitting in with health care professionals and seeing the human stories behind Dementia, this eventually led to the 2014 EP Remember Me, featuring five songs inspired by and dedicated to individuals Martin met. Co-produced and written by Dale Murray, the EP won the 2014 Music Nova Scotia Award for Inspirational Recording of the Year.

After a spell of touring in Europe including eighty concert dates and an Artist Residency in Germany, Martin hit back hard with 2015’s It’ll Be Alright - her most varied and elusive pack of tracks yet. This found Christina attaining what her music has always suggested, a place where the ghosts of her musical heroes freely mingle with the architecture of modern music. Alongside loyal producer/guitarist Dale Murray, drummer Brian Murray, keyboardist John Boudreau and bassist Jason Vautour, Martin made a conscious effort to confound the expectations and break free of conventions. An album of contradictions - fragile yet furious, explosive and delicate, jubilant yet heartbreaking all in one package. The machine-gun riff of the title track, the arena-filling grit of Puppet Museum, the dreamlike psychedelia of Take Me Back In A Dream, it’s the many contrasting sides of Martin’s musical identity all pulling together like a well-drilled crew. The album won a 2016 ECMA for Pop Recording of the Year and the title single rose to #6 on the CBC Radio2 Top 20 chart. Soaring roof-lifter You Ran From Me was voted the #14 most played Canadian song on Sonica for 2015, and the pounding rollercoaster ride of Somewhere With You saw Martin’s music return to CBC’s Heartland with a vengeance.

After two full years of relentless touring the breadth of Europe and North America, Martin returned to home turf to cut 2018’s Impossible to Hold. Martin’s sixth and boldest studio album yet, it walks the tightrope expertly between organic ambience and impeccable production, finding that hallowed ground where passion and poetry meet. Martin says “I’m writing about faith and love more than ever with songs like ‘Keep Me Calm’ and ‘Always Reminding’, but I haven’t shaken the need to write about the darker things that are part of our human journey”. Dark and dreamy as a halloween night, it employs cascading guitars and foreboding lyricism to craft Martin’s deepest album yet. From the heart-stopping war ballad Deep Dark Red to the nightdriving anthem Where the Dark Meets The Light, it’s an album of worldly observation and clinched the 2018 Music Nova Scotia Award for Pop Recording of the Year. The album’s crowning glory is the titanic first single Lungs Are Burning, which showcased Martin’s passion for human stories, a fervent anthem for those who are lost and longing and one of her most cutting compositions to date. Triggered by the rising Fentanyl drug crisis killing thousands of Canadians, with lyrics like “while I’m watching the babies” and “got to go out and get some, baby”, Martin captures the desperation of chasing the dream and the horror of living it, whilst Dale Murray’s stately production brings that stark reality home with a bite. In her own words, “The song is a modest attempt to bring light to the heavy topic of addiction, and reflects my own personal sense of loss, longing and a deep void, and the ache I feel from losing my brother and friends to addiction and mental illness.” For her Canadian tour dates between 2016-2019, Christina partnered with Center for Addiction and Mental Health to increase engagement and awareness.

2020 saw the release of Martin’s seventh album, Wonderful Lie. Surrounding four originals, the album saw Martin bring her signature fragile-but-furious brand of smart-rock to bear on a collection of diverse covers. From the duet of Love Hurts with harmonies to shake mountains, to the bluesified rendition of Dylan’s Make You Feel My Love, to the bring-the-house-down take on Abba’s Winner Takes it All, Wonderful Lie is as scrumptious as it is surprising, showing the real power at Martin’s fingertips in how she takes such a disparate slew of songs and makes each one feel her own.

With a brand new album on the way, promising to be more sweeping and orchestral than ever before, Christina Martin is going from strength to strength. It’s a fine thing to be a lyrical troubadour with honest lyrics that cut like a razor, and it’s a fine thing to be a performer who can make hips shake and tears flow at the drop of a casual chord. But to hold both in the palm of your hand, as Martin does with such grace, is downright remarkable. Resolute, raw, and infinitely listenable, Christina Martin is like the wind. Her music can be gentle as a kiss upon your cheek, but if you’re caught off guard it can carry you away, and has the power behind it to blow your house down.