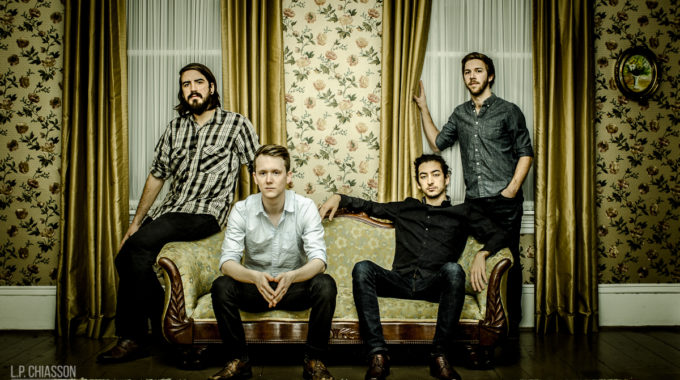 Named after Cy à Mateur, a legendary acadian figure from Nova Scotia, Cy mix in a genius and genuine way different styles : folk, progressive and traditional with intensity and humor. All five musicians grew up in a french minority and they are proud to sing with their accents.
With 3 guitars, mandolin, keyboards, drum and 4 voices, this band has taken to the road, in Canada and Europe, promoting their music. Jacques Blinn, Guyaume Boulianne, Eric Dow, Normand Pothier (from Nova Scotia), and Jacques Boudreau (from New Brunswick) are Cy. They have 1 EP and a full-length CD ‘’Deuxième Nation’’ was released in 2016. “With our music, we combine the past and the present. We like to look in archives, found old songs or melodies, and modernise them. Either that or we look for stories in our neighbourhood in Nova Scotia, and we tell those stories in a song.”

2017
- Nominated for the « Francophone album of the year » with « Deuxième Nation » at the ECMA (East coast music award) gala.
- Nominated for the « best album- acadie » with « Deuxième Nation » at the Gala Trille Or in Ottawa.
- They created a song in collaboration with the distillerie « Les fils du Roy » : http://www.fortlatour.ca