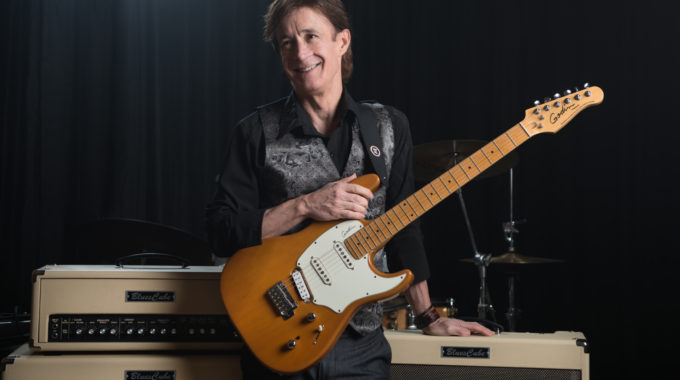 Friends say they don't recognize him without a guitar strapped on, as Dan Doiron has been addicted to the raw energy of the guitar since he formed his first band at age 13 in Port Hood, Cape Breton, Nova Scotia. An inventive guitarist, Dan fuses potent guitar riffs and grooves with unique lyrics reflecting his views on everyday life, ensuring an emotional, thrilling musical ride at every band and solo show. He’s profoundly committed to the music, crafting his own style that draws upon over forty years of his traditional and modern guitar studies and experiences as a musician, songwriter, music educator, (B.MUS.Ed from Dalhousie University with a major in classical guitar), National guitar clinician, (Roland Canada), and recording engineer. Dan is also dedicated to sharing that passion and knowledge and has developed a diverse variety of workshops and clinics that focus on guitar technique and improvisation, songwriting, and incorporating technology to assist musical growth. He’s experienced in presenting to all ages and levels and especially enjoys the opportunity to inspire the next generation of musicians through “Blues in Schools” presentations. After many years as a sideman, in 2011 Dan stepped out as a solo recording artist, earning both East Coast Music Award and Music Nova Scotia nominations for his debut CD, “Even My Guitar Is In Love With You”. A torrential body of multi award nominated work has followed and in May 2018 he released his fourth album “Livin’ Centre Stage”. This album won the 2018 Music Nova Scotia Award, and has been nominated for a 2019 East Coast Music Award for Blues Album of the Year and “Live Centre Stage,” is also the credo of his award winning 2018 Start Up Canada initiative to inspire others to live their passion regardless of age or stage in life. Find more information about the program at www.LiveCentreStage.com In October 2017 Dan and his band won the East Coast Blues Society’s “Maritimes to Memphis” competition for a second time, awarding them the honour of representing Atlantic Canada once again at the worlds’ largest Blues competition, the International Blues Challenge (IBC) in Memphis. Awards: Nominated for 2019 Maple Blues Award for “New Artist of the Year” Livin’ Centre Stage nominated for an East Coast Music Award for Blues album of the year Livin’ Centre Stage wins 2018 Music Nova Scotia Blues album of the year Two time winner of the Maritimes to Memphis Blues Challenge Three time East Coast Music Award nominee for Blues Album of The Year Three time Music Nova Scotia Award nominee for Blues Album of The Year Past Performances: From playing intimate solo house concerts and blues clubs, to his band’s energetic performances at major festivals, Dan’s priority is to connect with the audience at every opportunity.“At every show I realize that it’s a great honour to meet people, share music and stories and I never take that privilege for granted..” Calgary International Blues Festival – Calgary Alberta Halifax Jazz Festival – Halifax N.S. Harvest Jazz and Blues Festival – Fredericton N.B. Prince Edward Island Jazz and Blues Festival -Charlottetown PEI Sydney Jazz and Blues Festival – Sydney N.S. Contact: To schedule interviews with Dan, to book Dan, and to get more information about Dan and his many musical offerings, contact: Email: Dan@DanDoiron.com Cell: 902-222-2182