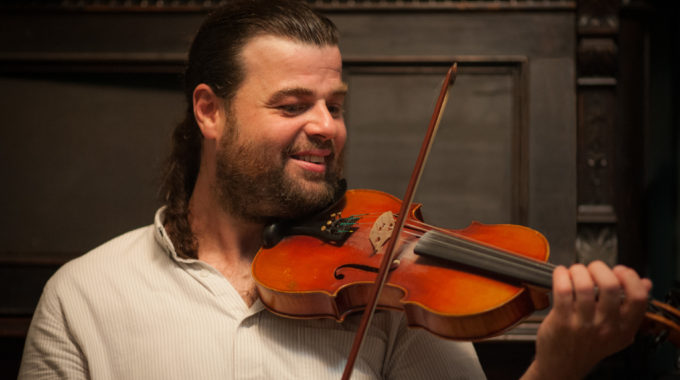 MacDonald is from a family of musicians from the small village of Ironville, Cape Breton and began playing fiddle at a very early age. His fiddle education came mostly from his father, Lloyd MacDonald, who is a well-known and respected Cape Breton fiddler, and from the surrounding musical culture of Cape Breton Island. In recent years, MacDonald has been a mainstay at the Irish music session at Dora Keogh and Ceili Cottage Irish pub in Toronto as well as producing an Irish/Scottish dance and music show called Brogue. MacDonald’s ongoing project is North Atlantic Drift, a Toronto based trio including himself on fiddle, Brian Taheny on guitar, banjo, mandolin and fiddle and Ross Griffiths on Scottish pipes, Irish pipes and whistle. This group features the blending of Scottish, Irish and Cape Breton in many different combinations of instruments, having released a self titled CD and performing at festivals and other events in Ontario and the United States. In 2018, MacDonald released his first solo fiddle record, “Rural/Urban” at Hugh's Room in Toronto to a sold out audience.

Originally from Ironville, Cape Breton, Dan MacDonald began playing the fiddle at a young age, under the instruction of his father, Lloyd MacDonald, himself a well-known and respected Cape Breton fiddler. His early immersion in the strong musical culture of Cape Breton Island informs his now diverse musical voice, which has grown in strength and scope as he has travelled the globe and worked with a myriad of musicians of all styles. Currently residing in Toronto, Ontario, Dan is in demand as a solo fiddler, a session musician, and on recordings spanning many genres. He is a member of acclaimed trio North Atlantic Drift, with whom he has performed at countless festivals throughout Ontario and the United States. His first solo album, Rural/Urban, was released to a sold out audience in Toronto in 2018, and has been described as “vivid, superb” and “intriguing.” A true “unifying force” for audiences and musicians alike, Dan is an artist who continues to bridge musical genres and push the boundaries of traditional music.