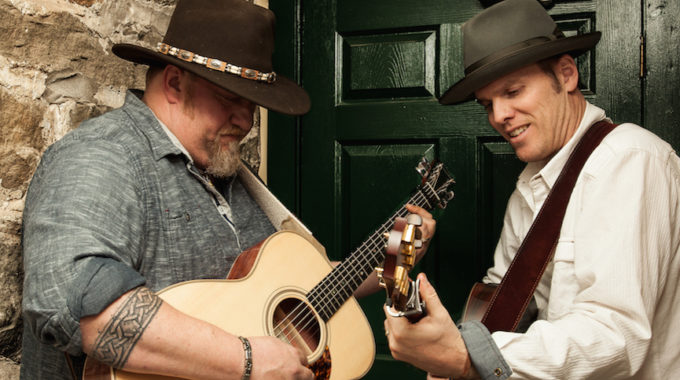 Two of Canada's greatest roots singer-songwriters have finally done what everybody's wanted -- heck, what they've wanted -- for years. Dave Gunning and J.P. Cormier are releasing their first album together, called Two. Great friends, frequent collaborators, co-writers and touring partners, the pair has been talking about this album since pretty much the day they met. Now it's here, and it's everything fans hoped and dreamed it would be.

The album is called Two because that's what it is, just the two of them.

"We wanted to keep it simple and honest so we essentially made a 4-track recording, just two guitars and two vocals. Limiting ourselves this way actually helped inspire the arrangements and the performances. It forced us to dig a little deeper.", says Gunning.

“A lot of artists like us feel compelled to put these massive productions together, and we said we're not going to do that,” adds Cormier. “We're going to make this record be that large with only two instruments and two voices. And we did that."

Two is made up of everything the duo excels at. There are new collaborations between the two writers (Brothers, Home To Mary), new arrangements of antique folk numbers (Johnny Armstrong, Katie o' the Gowrie), and some tasty, surprising covers (Never Picked Cotton, Stompin' Tom's Songbird Valley).

Every song had to meet their very high, combined standards. "We didn't take it lightly," confirms Gunning. "We really put our heart into it.”

Gunning & Cormier go back 23 years, when Dave had a fiddle player drop out of a show at the last minute. "He hired me for a gig when I was just back from Nashville, nobody knew me here," says Cormier.

"We were totally blown away by J.P.’s playing,” recalls Gunning. "I remember him saying if you ever do a CD, I want to play on it." That happened, and much more. They played together and wrote together whenever they could, coming up with songs that graced both their projects, over the years showered with awards and nominations on the East Coast and nationally.

Since they've been two of the busiest solo musicians in the country these past two decades, it's been impossible to schedule time to make a full album and properly tour it. But that all changed three years ago when Cormier moved just down the road from Gunning in Nova Scotia's Pictou County, and the pair were able to meet often at Gunning's home studio.

First, they picked some great songs. Then they figured out their guitar parts, and when ready recorded the guitars ‘live-off-the-floor’ simultaneously. Then they recorded their vocals together. This recording technique gave them what they'd hoped for, something unlike their solo albums: The power of Two.

"It actually creates a sympathetic overtone like a third instrument sometimes," marvels Cormier. "You go, wait a minute, why does it sound like there's another guitar? You sometimes can't tell us apart, or sometimes even our vocals you can't tell apart, which is really weird because our voices are nothing alike, but when we sing together, we have a sibling harmony, we blend like brothers."

Gunning & Cormier have been playing some select gigs over the past few months, in anticipation of the album's release. "It seems to be a different kind of response from the audience that I'm not too sure that either of us have experienced before,” says Gunning. “We love singing together, we love playing guitar together, it just works."

Two is as real as it gets. Two songwriters, interpreters, guitar players, and singers at their peak. It's the power of the song, the highest quality from the past to the now. It's two friends, brothers, uncompromising performers, making the album of their lives. There couldn't be a better time to discover Gunning & Cormier, and the power of Two.