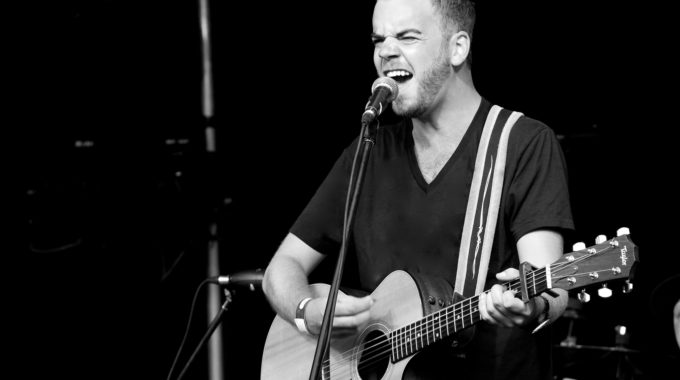 Dave Whitty has been a member of the music scene in St. John's, Newfoundland since age 17. He got his start playing solo sets of original music, recording a couple small demos, and generally trying to learn the craft and flow of how the music community worked.

As Dave’s talent grew and matured, so did his focus. After three years of solo work, Dave, along with a couple friends formed a new band, well-known to the St. John’s music scene called At Ships End. This Celtic/Folk/Rock group played everything from Christmas kitchen parties to summer nights during St. John’s infamous George Street Festival. Although At Ships End is still present in the St. John’s music scene, Dave decided that after three years with the band to move on to pursue something different.

For a year and a half, Dave was booking gigs around St. John’s, building his already loyal following, which included a weekly George Street residency - affectionately called Quidi Whitty Tuesday - at the historic Trapper John’s pub. During the other six days of the week, Dave could be found in other venues playing traditional Newfoundland sets or three-hour shows of original music.

If you listen to Dave’s music, it won’t take long to figure out the hardcore pride he has for his home province and all the good times and beauty it brings. Sticking to his musical roots, Dave writes and sings about actual events and classifies his style as folk/rock with strong lyrics of friendship, love, and tales of growing up.

One minute, Dave is making his audience laugh with his genius comedic quality, singing about ridiculous adventures with friends, and the next minute he can conjure profound feelings of nostalgia or pain with his stories of finding love, losing friendship, and the things that make Newfoundland special.

Dave released a solo album in 2011 that he completely funded and produced himself. 'Let it Rest' has been for sale in record stores from St. John's to Toronto, selling nearly 3000 hard copies, and close to 5000 online.

Again, looking for more out of his songwriting, he reached out to other artists (and Newfoundlanders) with their own following at home and beyond - James Wright, Matt Cooke, and Jason Howard to ask them to join him in his pursuit, at which point, the Dave Whitty Band was born. Two years later, the group has toured extensively throughout Newfoundland, and the east coast of Canada. They have been asked to play the George St. Festival on two separate occasions in St. John's, opening for The Sheepdogs, Cuff the Duke, and Great Big Sea, as well as being invited to showcase at Canadian Music Week in 2014 in Toronto.

In the spring of 2015, Dave, hired Robert Kelly, to produce and engineer his first full length album. With the help of some of St John's best musician's the self-titled record was released in July 2015, and features 11 new songs with full backing band. With that record, Dave, will take his show on the road and start touring throughout Canada, USA, and Mexico in the Fall/Winter 2015/2016.