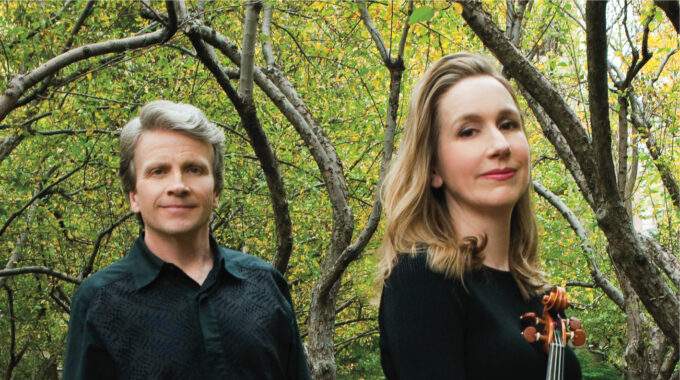 Nancy Dahn and Timothy Steeves, as Duo Concertante--Canada’s premiere violin and piano ensemble--are partners in music and in life. The Duo’s busy international touring schedule takes them throughout North America, Europe, the UK and China, with performances at the Wigmore Hall, Weill Recital Hall, Roy Thomson Hall, the National Arts Centre, and the Forbidden City Concert Hall in Beijing. Duo Concertante have released 12 CDs on the ATMA, Centrediscs, and Marquis labels. The all-Canadian album Incarnation was named one of CBC Radio’s Top 10 Classical Recordings of 2017, and was also recognized by the East Coast Music Association, which awarded Duo Concertante Classical Recording of the Year for three consecutive years. Nancy and Tim have consistently supported new music, commissioning over 65 works for violin and piano from many of Canada’s leading composers, including R. Murray Schafer’s Duo for Violin and Piano, which won a JUNO award on their 2011 CD Wild Bird. In 2020, Duo Concertante launched their 11th CD Schubert: Works for Violin and Piano (Marquis), recognized by the CBC in their annual roundup of the TOP 20 Classical Music CD’s of the year. Critics declared this “thrilling…especially beautiful…[and] heart-rending”. Fellows of the Royal Society of Canada, they are also both Research Professors at Memorial University and Artistic Directors of the Tuckamore Festival.