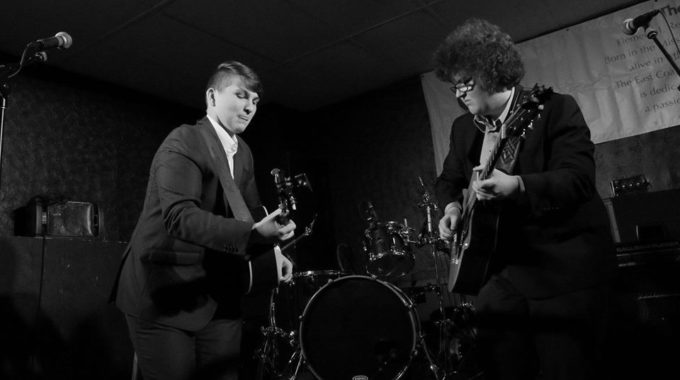 National award winning duo Nick Earle and Joe Coffin from St. John’s, NL are two young bluesmen you should definitely get to know! Earle and Coffin’s debut album “Live at The Citadel House” is a collection of the duo’s favorite blues standards recorded live in concert, ultimately earning them the 2016 Canadian Folk Music Award for Young Performers, as well as ECMA and MusicNL nominations. Reviving old blues is just one of the projects these guys have been working on, in February 2017 Earle and Coffin released their sophomore album “Wood, Wire, Blood and Bone”.

This “potluck” of electric blues, rock, and be-bop inspired originals and classic blues standards earned them the 2017 MusicNL Jazz/Blues Artist of the Year Award and multiple other MusicNL nominations. Most recently Earle and Coffin were nominated for the 2018 ECMA Blues Recording of the Year.

“A Day in July” is the newest project released under the Citadel House label. This acoustic EP was recorded live off the floor and features three acoustic versions of originals from “Wood Wire Blood & Bone”, as well as three brand new unreleased originals written during the summer of 2017. To add to the accolades, the duo won the 2017 Maritimes to Memphis International Blues Challenge in the solo/duo category and in January 2018 Earle and Coffin proudly represented Atlantic Canada at the coveted International Blues Challenge in Memphis, TN, advancing to the Semi-Finalist Round. In addition to making great music and winning awards these 18-year-old blues men have been getting around touring festivals and showcases throughout Canada and the US, most recently showcasing at the Folk Alliance International Conference in Kansas City, MO. In April 2018 the duo started recording their next album and is set to release in mid-2018.

Earle and Coffin are soulful vocalists, brilliant guitar players and blessed with engaging personalities experienced beyond their years.