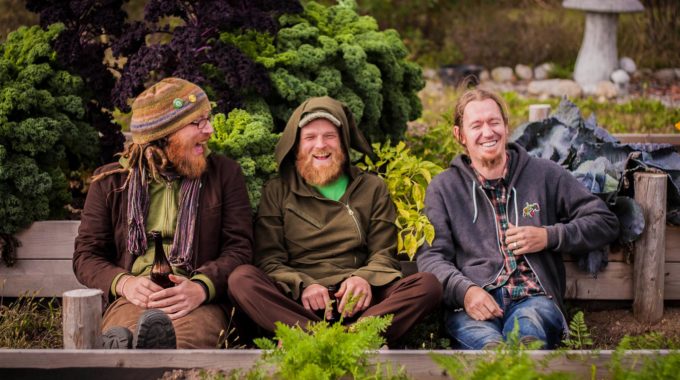 Earthbound Trio, at first glance, resembles a traditional acoustic trio, but these three talented musicians blend elements of folk, funk, blues, reggae, and rock with clever effects and engineering to create a wave of sound you would never expect from the acoustic instruments on stage.

When they’re not tearing up the tour circuit, the band also works together on an organic hops farm owned by bassist Bob Fitzgerald. Using the daytime hours to grow the noble vine and the night time to sing and play together in the quiet of the NB countryside. This rare combination has helped the band develop their earthy signature sound which has sometimes been described as “Farmer Funk”.

That isn’t just a catch phrase intended to grab your attention - Earthbound Trio are the real deal. At a time when more and more artists are struggling to be heard amidst the din of machine formulated music, their music, is organic in all its forms.

Comprised of songwriter and guitarist Dwayne Doucette, Mike Humble on drums and percussion, and Bob Fitzgerald on bass, the group has earned a fiercely devoted following in the time since the 2013 release of their debut EP Lettuce Turnip The Beet, a release that garnered the band a trio of Music New Brunswick Award nominations in addition to an East Coast Music Award nomination.

Earthbound Trio’s ever-growing following is no accident or stroke of luck. The group can lay claim to having played well over 100 individual shows in support of their first release, including showcases and performances at East Coast Music Week and Music New Brunswick Week, two successful tours of Ontario and Quebec, and the 2014 Harvest Jazz and Blues Galaxy Rising Star competition where they took home the grand prize.

The title of the trio’s latest effort, Ditch Flowers is a nod to the famous Neil Young quote, "Traveling there [the middle of the road] soon became a bore so I headed for the ditch. A rougher ride but I met more interesting people there.”

“None of us really live in the middle of the road,” Earthbound Trio’s guitarist Doucette says, “but in the ditch we’ve found a whole ecosystem thriving and growing. We all know growing can be fulfilling but tough at times… In this release we’ve got some lyrics that are a little darker than what you might expect for upbeat songs - sometimes that’s what life offers up: A little dark with the light.”

A large part of the band’s appeal is their musical versatility across genres including folk, reggae, bluegrass, roots, funk, and rock. All too often, bands are painting themselves into a musical corner. After all, why should any band be defined by just one style of music when their member’s individual and collective tastes are so varied?

“’Harbour Town’ has a real bluegrass feel to it, a genre we love but haven’t recorded before,” Doucette notes. “‘Soil and Ash’ on the other hand is a seven-minute rocker that we have a blast playing live.” Doucette says.

Recorded by John McLaggan at Porchlight Studios, Earthbound Trio intentionally kept the making of Ditch Flowers a local affair. Captured live off the floor with only a handful of overdubs, Doucette says the band aimed to release a recording that was more indicative of their live shows: An album which simultaneously embraced and showcased their broad musical horizons yet maintained a lively, unscripted feel throughout.

The songs on Ditch Flowers tend to run a little deeper than what fans might be accustomed to, the band’s cry for political change is clear in the song “Big Man,” while on “Miner’s Song,” which features some creative percussion in the form of Humble’s grandfather’s old work boots and some rusty chains, the group looks closer to home, touching on the difficulties that can go hand-in-hand with being a blue-collar worker in Atlantic Canada.

Yet Earthbound Trio’s pride and hope for their home is evident.

“With such a large portion of the population choosing to leave the province in search of work, we wrote ‘Plant A Seed’ to remind people to nurture what we have here. We are all New Brunswick-born and raised and are confident that if we work together, people have the power to save their communities and give themselves more choices by getting something started right here - all while getting to call one of Canada’s most beautiful provinces home.”