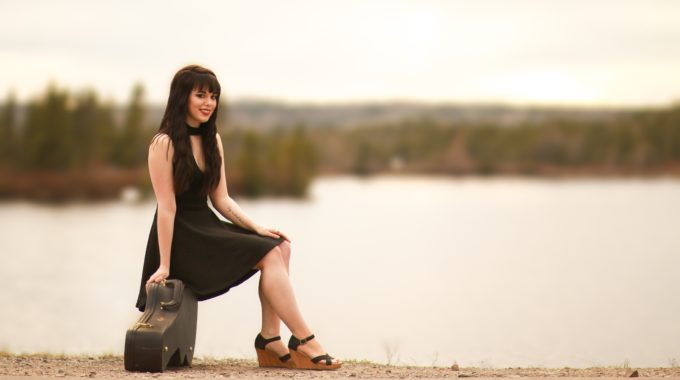 Ontario-born and Newfoundland-raised, Emily Taylor Kelso was surrounded by country music from day one. Her family loved music more than most, and most family get-togethers were centred around country music, jam sessions, and sing-alongs. At 2 years old, if you asked Emily who her favourite singer was, she would, without hesitation, tell you it was George Jones. She grew up idolizing fellow Canadian Shania Twain, whom she credits as one of her very first musical inspirations. As she neared adulthood, Emily’s appreciation for country music and its origins increased drastically. The music of Loretta Lynn and Merle Haggard resonated with her so much that she immediately knew country was the only genre for her. There could be no fighting it—country music was in her soul.

Emily first began her musical journey at a young age with piano lessons, then vocal lessons. In 2009, she discovered that aspiring singers were finding success by uploading covers of popular songs on YouTube, so she decided to do the same. Her cover of Miley Cyrus’ “Party in the U.S.A.” earned her half a million views before it was made private. That same year, Emily received her first guitar and taught herself to play. Though she’d been writing lyrics and melodies since age 9, learning to play the guitar allowed her to get serious about her song-writing. So far, she has amassed a collection of over 500 original songs, all without a co-writer, although she is eager to start collaborating with other artists in the future.

Over the years, Emily performed frequently in her hometown of Norris Arm, which is home to the Fox Moth Heritage Centre. After graduating from high school, she got a summer job as a musician at the Hann’s Point Dinner Theatre in Lewisporte, where she spent the next four summers working. At Hann’s Point, Emily got the opportunity to work with other incredibly talented musicians and share her love of country music (and some of her original songs) with audiences from not only all over the province, but all over North America. She and her Hann’s Point Players bandmates have played in various locations in central Newfoundland over the years, giving her the stage experience she desired. In her final year with the Hann’s Point Players, Emily starred as Loretta Lynn in the play “Honky Tonk Girl,” a play about Lynn’s life and career. This was a dream come true for the aspiring country artist, and the show was hugely successful.

Determined to make it in country music, Emily wasn’t about to wait around for a record deal to get her music out there. She used her free time to immerse herself in the history of country music as well as the business side of the music industry. By 2017, she had formulated a plan to self-release her very first album. To honour the town that had shown her unwavering support, Emily chose to record her music in a studio in Norris Arm during her final summer at home. She put all her time, effort, and money into making sure the album was everything she ever wanted. The result? An album that pays tribute to the artists who made country music into the genre Emily fell in love with—like Merle Haggard, whose 2016 death added even more fuel to Emily’s love and appreciation of the genre. An album that rejects the inexplicably popular electronic and pop-infused country music that has recently been dominating the charts. An album that Emily hopes Merle, George, and Loretta would be proud of. An album called “Something Beautiful.”