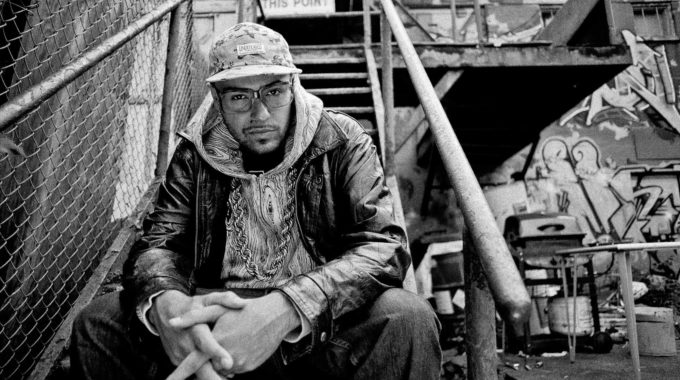 Strongly influenced by early '90s Golden Era Hip Hop, this JUNO Award nominated M.C. has a smooth flow on the mic, sharp wit on the punch line, and a sweet tooth for pop culture references. Layered over a mix of delicious instrumentals, Ghettosocks delivers a tasty serving of Hip Hop goodness that will satisfy the most demanding of rap gourmands.

Noted as one of the top rappers in Canada (The CBC’s Top 25 Greatest Canadian Rappers Ever), Ghettosocks is a JUNO Award nominated Hip Hop Producer and MC born in Ottawa and living in Halifax, Nova Scotia, Canada. From 2002 to 2006, he attended and completed his media arts degree at the Nova Scotia College of Art and Design (NSCAD) in Halifax. While there, Socks would establish himself as a prominent member of the local Hip Hop scene. Founder of Public Rap Distribution (known as PRD, a cypher where local rappers would gather to test their battling skills), Ghettosocks also demonstrated his love for the art of Rap and performance by participating in numerous benefit concerts and youth groups including CKDU 88.1 FM Fundraisers, Books Behind Bars, HRM Schools, Girls’ Empowerment Mentoring, Halifax Public Libraries, Winter Homeless Shelter, various all-ages shows, and rap battles.

In a short period of time, Socks has built his fan base from his Halifax headquarters, stretching across Canada, Europe, South America, Australia, Japan, and the United States. His unorthodox songwriting style, energetic live performances, and captivating free-styling abilities have earned him a spot among the elite of Halifax Hip Hop talent. Constantly touring various regions of Canada, Socks has opened for a who’s who of established artists including: Nas, Afrika Bambaataa, Special Ed, The Gza, The Beatnuts, The Herbaliser, El da Sensei and The Returners, and Kool Herc to be brief. Socks is no stranger to the road, having performed throughout Canada, embarked on two American tours, three European tours, plus an introductory Japanese tour of Osaka and Tokyo in 2010.

After producing two demos Socks released his debut LP, Get Some Friends (GSF) in November of 2006. In 2007, he released his follow-up, I Can Make Your Dog Famous Mixtape (ICMYDFM) with DJ Jorun Bombay. GSF debuted at #1 on both Chartattack and !Earshot, Canadian college radio charts for 2007. ICMYDFM was still in the Top 20 hip hop chart for !Earshot as of December 2009.

Socks’ sophomore release, entitled Treat of the Day (TOTD), boasts 16 high-cholesterol songs, featuring guest appearances from El da Sensei, Pumpkinhead, Edgar Allen Floe, Cesar Comanche, D-Sisive, Muneshine, Apt, and Timbuktu. TOTD hit #1 for Hip Hop on !Earshot college radio charts almost immediately, and ranked at #36 in the Top 200 for January 2010. In 2011, Ghettosocks received a JUNO Award nomination for his TOTD, in the category of Rap Recording of the Year. The continuing success of this album has led to a U.S. campus radio campaign in the late summer of 2011. TOTD became the #2 add for Hip Hop across nearly 200 stations on the Campus Music Journal network (CMJ) in it’s first week, and peaking at #2 on the Top 40 Hip Hop chart after four weeks.

A recent addition to Socks’ discography is a new mixtape collaboration with Ottawa DJ, Jon Deck. Called We’re Going To Drink A Lot Of Wine This Year, Boys. (#WGTDALOWTYBzzz), this mixtape is all flow, with a continuous mix that reveals intense fruit aromas and flavors of Muneshine, Torae, Timbuktu, Ambition and Apt, complemented by hints of Bix, Juju (Beatnuts), General Mills and Petey Punch. The plush, velvety ear-feel and the smooth finish round out this intriguing, full-bodied blend. Grab your bottle-of-wine-glass and enjoy.