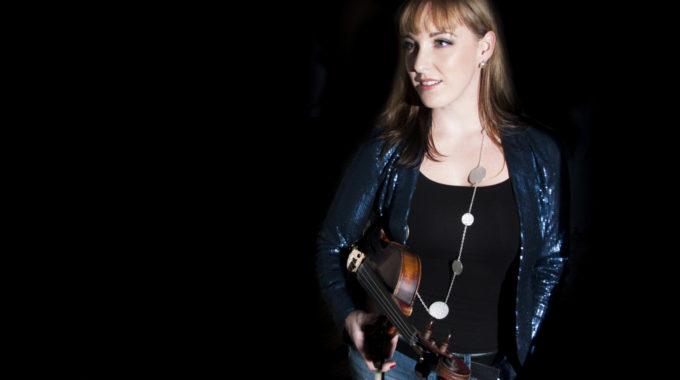 Recipient of the Nova Scotia Music Week Award in 2009 for Roots Traditional Recording of the Year and a 2010 East Coast Music Award Nomination in the same category, Gillian’s debut album, Elemental, recorded by CBC Radio-Canada received high acclaim and put her individual stamp on the world of Celtic music, seamlessly blending the music of her ancestors with sounds reflective of years of global adventure. Originally from Inverness County, Gillian was born into a family steeped in Cape Breton traditional music and language. Her grandfather and one of the founders of the esteemed Broad Cove Scottish concert, Lauchie MacLellan, was a renowned Gaelic singer and storyteller. Already an avid step-dancer, Gillian first held the violin at the age of 10 and has continued to delight audiences around the world with her unique approach to the music of her heritage, more recently as an acoustic duo with guitarist Seph Peters.

While living in the UK and Ireland, Gillian founded the all-girl band Maysha and was a featured performer on Scotland's Television Programme 'Tacsi'. Gillan's music can also be found on Scotland’s Foot Stompin' Records album 'Heat the Hoose Volume 2' and on Irish Fiddle virtuoso Manus McGuire's albums 'Saphire and Blue' and ‘Fiddlewings.’ In 2002, Gillian joined the team at Grey Coast Theatre Productions in northern Scotland as musical director for the production ‘Farm Land’ and a 30-date tour of the Highlands and Islands. Becoming a mum in 2003, Gillian took some time away from the spot light and founded Flying Club Music where she worked as manager and agent, dividing her time, chasing the summer sun, between New Zealand and Canada. In 2007 it was time to get back on stage and Gillian joined the team of New Scotland Productions in Nova Scotia as a member of Celtic Angels at Christmas, annually aired by BRAVO! and Vision TV.

Highlights have included tours of Scotland, England, the Philippines, the USA, New Zealand and Canada in collaboration with musicians including but not limited to the Mary Jane Lamond Band, harmonica genius Brendan Power (Sting, Van Morrison) and guitar virtuoso Andrew White; a featured performance for the Canadian Ambassador of Turkey's Canada Day Celebrations in Ankara, Turkey, where her collaboration with the Black Sea Dance group received critical acclaim and media attention from Turkish Newspaper, Radio and Television national media. In 2011, the Gillian Boucher Band featured at the Celtic Connections Festival in Glasgow to rave reviews immediately followed by the Canadian Blast Tour of England and Wales.

October 2013 saw the official release of Attuned, Boucher’s highly anticipated second album and duo collaboration with long-time friend and guitarist Seph Peters (Mary Jane Lamond) featuring slicing playing and intricate musical conversation. A step away from the more contemporary attributes of Elemental, Attuned reflects the deep connection Gillian has with her Gaelic heritage and also her individualistic style, skill and command over her music, demonstrating her diversity as a traditional artist.