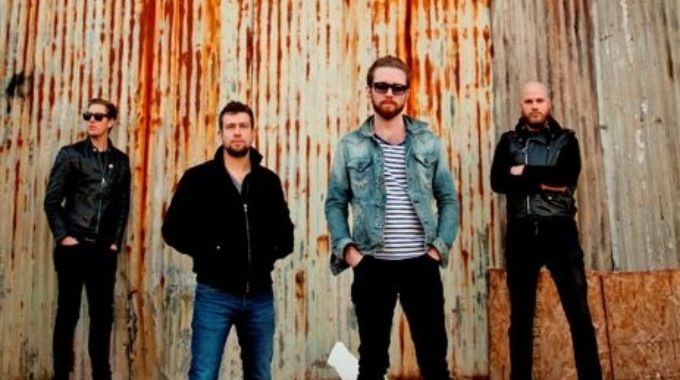 In their formative years Gloryhound listened to Alice Cooper, The Ramones, Thin Lizzy and Iggy Pop. All of these influences can be heard in their self-styled form of rock, but their sound is truly their own. Simply put: “All stacks, no macs.”

“A group that's become one of the leaders on the East Coast, Gloryhound is making a name by returning to core values of guitar rock. They play loud, hard, and smart, with a sound that skirts '70's classic, but feels crisp and new” says CBC journalist and author of Top 100 Canadian Albums, Bob Mersereau, “the group showed why they have become known as a premiere live act, one that should easily break out in the rest of the country.”

And break out they have.

With their ECMA nominated debut Leave It Alone under their belts, Gloryhound took up temporary residency in Toronto to both impress the masses and record their second record. With producer Laurence Currie at the helm, Gloryhound recorded Electric Dusk, a seven-song EP that delivered rave reviews from regional and national media, and garnered multiple award nominations from both Music Nova Scotia and the East Coast Music Association.

On the strength of that recording, and a no holds barred sonic blast of a live performance, the band was signed to the prestigious Agency Group, scored prime showcase stages at Canadian Music Week, NorthByNorthEast and Junofest, and secured a label deal with eOne Music Canada.

Gloryhound cut their touring teeth playing stadiums throughout Atlantic Canada with rock icons Deep Purple, rocked Toronto’s Sound Academy as openers for Thin Lizzy, crossed the country as direct support for The Cult and along with their own coast to coast headline shows, the Halifax, Nova Scotia based foursome have shared the stage with CJ Ramone (of The Ramones), Thornley, Sam Roberts, Drive By Truckers, Big Wreck, Three Days Grace, I Mother Earth, Nickelback, The Sheepdogs, The Trews, Tokyo Police Club, April Wine, Headstones and the one and only Willie Nile with whom they’ve also had the pleasure of co-writing.

Gloryhound have also made their mark in film and television. Their song “Cruel Little Tease” landed in the opening segment of Michael Melski’s award-winning feature film Charlie Zone, their hit single “Electric Dusk” was licensed to feature film Love Me and placed in NHL Plays of the Week, while their second single, “TKO Tokyo” scored placement in CFL Plays of the Week and in the critically acclaimed TV show, Less Than Kind. Three songs from the EP - “Keep A Light On You”, “Fever Stricken Night” and “Yes You Are” – were featured in episodes of hit TV series, Rookie Blue.

Fall 2013 saw Gloryhound settle in to The Farm Studio in Vancouver, BC, home turf of well-heeled producer Garth “GGGarth” Richardson (Hedley, Rage Against The Machine, Nickelback, Rise Against, Ten Second Epic, Head of The Herd…), who guided them through the making of their new, full-length album, Loaded Gun, while legendary music and entertainment producer, Bob Ezrin (Alice Cooper, Kiss, Pink Floyd, Fefe Dobson, Peter Gabriel, Lou Reed…) came on side for the mix and polish of Gloryhound’s Loaded Gun.

Comprised of Evan Meisner (lead vocal/rhythm guitar), David Casey (lead guitar/bg vocal), Shaun Hanlon (drums) and Jeremy MacPherson (bass), Gloryhound have amassed an ever-growing, faithful pack of rabid fans across Canada and are ready to crank it up another notch.

With one boot firmly rooted in classic rock style and the other in contemporary alt-rock, Gloryhound are ready to howl world-wide with the unleashing of their new album, Loaded Gun.