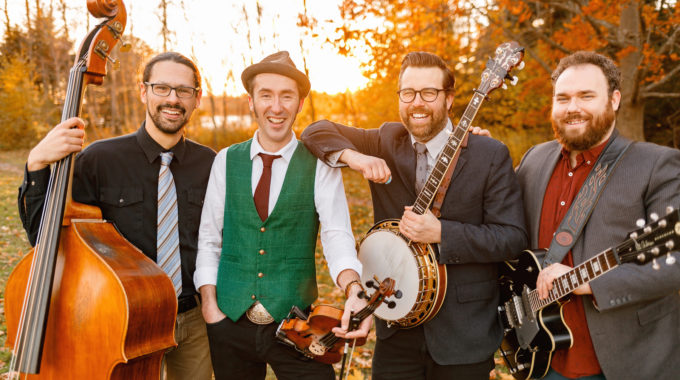 Gordie MacKeeman and His Rhythm Boys

There's no other band out around like Gordie MacKeeman and His Rhythm Boys. Led by fiddling wiz Gordie "Crazy Legs" MacKeeman, the roots quartet features all-star pickers and singers, with everything from down-home country to reckless rockabilly to intricate bluegrass. Now the boys are back in town with their fourth and latest release, Dreamland.

The band spent the past year exciting crowds all over the world, from Denmark's Tonder Festival and the U.K.'s Cambridge Folk Festival, to Merlefest in North Carolina and the Port Fairy Folk Festival in Australia. Crowds love them everywhere they go, thanks to Gordie's charm and flying fiddle and feet and their unique blend of just about every roots genre going. They love it all, old and new, and put on a variety show that has the fans dancing, laughing and singing along.

Along the way, they have collected a mantle full of awards and recognitions, with a grand total of 12 Music PEI Awards and East Coast Music Awards for their albums, Laugh, Dance & Sing (2015), Pickin' n Clickin’ (2013) and the self-titled debut (2011).

Dreamland is a big step forward for the group, as it features the greatest number of vocal tracks they've ever featured on an album. That highlights the development of the quartet, with all four members writing and singing their own material, and bringing their own strengths to the table. From the Cajun rocker "Sittin' In A Bar" to classic country sounds in "Strength In Numbers" to the beautiful lullaby of the title track, the group is showing their writing skills match their playing talents. It's a versatile, wide-ranging showcase that mirrors the live show, with four singers and multi-instrumentalists.

The members are all musical Swiss Army knives, able to pull out whatever instrument or style is needed. Peter Cann handles acoustic and electric guitars, banjo and vocals, Thomas Webb can be found on stand-up bass, guitar, banjo, steel guitar and vocals, Jason Burbine moves between drums, bass, guitar and singing, and while Gordie is mainly on fiddle, he'll grab the guitar, sit behind the drum kit and sing lots too. The result is an eclectic signature sound that draws upon bluegrass, old time country, folk, rockabilly, swing, Celtic, and other styles in genre-defying fashion.

On Dreamland the band wanted to capture all that versatility, and went off in search of a producer who had extensive experience working with lots of styles. They found him in Mississippi native Robert S. Field, best known for his work with Justin Townes Earle, Steve Earle, and Tim O’Brien. "It's nice to work with someone who gets the sound," says MacKeeman. “It has bluegrass elements, it has rockabilly elements, it has old-time elements, but to us it's all the same thing. That's why we wanted someone who understands rockabilly base as well as old-time fiddle and accordions.”

Dreamland is an album that moves from highlight to highlight, showcasing everything the band has to offer. There's no filler here, it's packed with their very best songs and very best styles. "I'm one of those people that has to enjoy everything on an album, and that's what we were shooting for, an album that holds people until the end," says MacKeeman. "And we always like albums to be a souvenir of our live show. To bring people back to that feeling they got seeing us live."

That feeling? The playing, the singing, the music, and those crazy legs? Feel the fun, with Gordie MacKeeman and His Rhythm Boys.

“A fantastically joyful ensemble, that whip up a storm of rockabilly influenced country; and wow Gordie’s dancing is something to behold, as all the band locked into a ferocious hoedown!”. - Cambridge Folk Festival Review

“Gordie and the boys have a reputation for lively shows, and at a festival, they’re in their element. So Gordie gave plenty of opportunities to see why he has the nickname “crazy legs” with his combination of frantic fiddle playing and lightning fast step dancing. And, there was his traditional closer, climbing onto the double bass while Tom Webb keeps to a rock steady bass line and Gordie fiddles up a storm. Visually, the performance is stunning, but it wouldn’t be half so memorable if the musicianship was anything short of excellent. Gordie has his work cut out keeping his legs under control so otherwise sticks to fiddle and vocals; Peter Cann delights on a range of acoustic and electric guitars while Tom and Jason Burbine happily swap between bass, banjo and guitar with Jason also looking after percussion. There’s a core to their music, both traditional and their own compositions but they also spread into bluegrass, old-time and whatever else they fancy.” - folkradio.co.uk