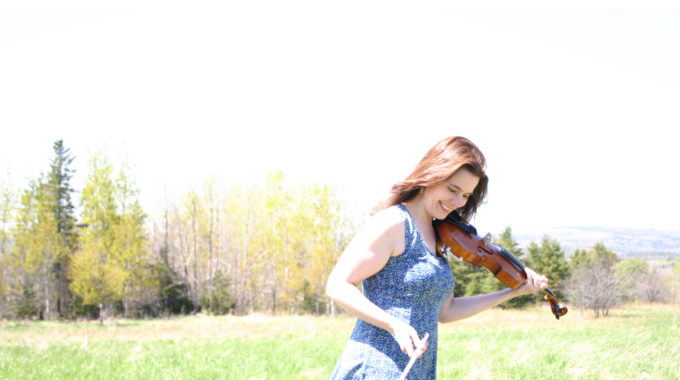 Raised in Pictou County, Nova Scotia, Heather was brought up surrounded by music. The fiddle, guitar, bagpipes and piano soon became her constant companions, and early on she developed her beautiful, soulful voice.

Heather knew well the power of music to reach people, which led her to become an accredited music therapist. She studied at St. FX University and Acadia University, then apprenticed in Calgary, Alberta.

While out west, she further developed her playing, trading tunes and techniques with some of the best players, and delving into the challenging world of Scottish Country Dance, where she excelled as a fiddler.

Since returning to Pictou County in 2015, Heather has established herself as a valued member of the community, practising music therapy, teaching fiddle privately, and performing around the province as a solo act, as an accompanist, and with her own group, Trad Trio.

JP was convinced that the time was right to share Heather’s stellar playing and diverse repertoire with a larger audience. The two set out to capture a sound and energy that would captivate, in collaboration with several other exceptional players from Heather’s community of gifted colleagues. The result is an album steeped in talent that blends the traditional and contemporary, taking the listener on a moving journey through life’s highs and lows.