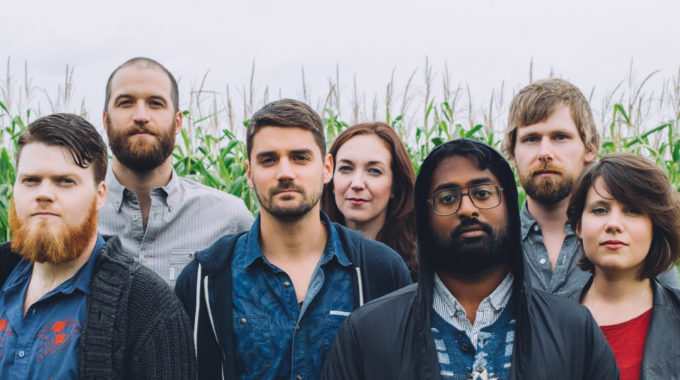 SECOND SIGHT, Hey Rosetta!’s first full album in nearly four years represents the longest musical gestation in the band’s history. In part, the delay was due to the lengthy touring cycle following the success of their last album Seeds, which was short-listed for the Polaris Music Prize, and resulted in the band’s first JUNO nomination and a performance on the JUNO telecast. There was also the band’s determination to expand their sonic horizons and, as songwriter Tim Baker puts it, “let each song come on its own terms and become what it will, unencumbered by some predetermined structure or symbolism or thesis.”

So when the band started recording at Montreal’s MixArt studio in late 2013 with producer Marcus Paquin (The National, Stars, Local Natives, Arcade Fire) SECOND SIGHT began as a long list of these new songs with “no real concept, no over-arching theme to the work,” says Baker. “We had enough songs for an album – but what was the album about? What were we trying to say as artists? How did these songs relate to one another?”

As the session progressed, things got clearer, but another familiar hurdle arose, “We didn’t have a single, which seems a perennial problem for us. We’ve never really had a single, but boy do people want one” Baker says. “At first we kicked against it, but then, eventually saw it as a challenge.” A second studio session was booked at MixArt from which “Kintsukuroi” emerged. It’s a song about real, broken, messy love, the title drawn from the Japanese art of mending broken pottery with gold, thus producing a new object of beauty with flaws highlighted instead of hidden – the idea being, that the object is actually more beautiful for having been broken.

SECOND SIGHT would also experience a rebirth – a re-breaking and the album’s vital lyrical connective tissue would reassemble to clearly define the common threads in Baker’s lyrics.

“I’d been thinking about potential, about the great promise within all of us that we never seem to fully realize. And as an artist, I’d been fixating on how to get there. Which led to another of the album’s main themes: this idea of shifting your vision slightly – moving away from your everyday, rational, denotative, left-brain way of seeing the world and embracing a more suggestive, intuitive, animalistic and ultimately more interesting ‘second sight’.”

You hear it in the lyrics to “Soft Offering (For the Oft Suffering)”. The song, Baker explains, “is all about morning coming to tear down the vision that the sweet, irresponsible, unscheduled hours of the night provides.”
You also hear it in “Kid Gloves”:

see the arches of paint
see the ocean of dust
see the colours arrange
and hover over us
like when we were little kids
lifted into our beds
didn’t we see it then?
before we turned our heads?

Over the near decade playing together, Hey Rosetta!’s collective sound has been lauded as unmistakable. They are a band that connects in an almost intangible, inexplicable way. Tim Baker’s haunting and distinctive voice and his writing, with a lyrical sensibility that defines the band as one of the most poetic Canadian exports; the rolling indie-rock precision meeting hooky pop sensibilities, off-set by the delicate touch of cello, violin (and now french horn), that cuts through the most cramped club or across any vast open air festival stage.

SECOND SIGHT became a way for the now seven-member band to experiment with their sound even further. Shifting more into musical textures, you can feel building up around you in tracks like, What Arrows and Promise. The instantly resonant choruses and lyrical depth all helped arrive at an album sound that Hey Rosetta! cellist and multi-instrumentalist Romesh Thavanathan calls “warm, yet mysterious.”

Baker likens the process to “swimming within the river of modern music”, and eventually moving with the flow of that river into uncharted musical waters. Says Producer Marcus Paquin: “I feel like it encompasses a wider range of musical influences than what I’ve heard from them before. Tim’s lyrics have expanded. Musically and dynamically, this record has a very wide range. And Tim’s unmistakable voice is the glue that holds everything together.”

“Marcus is incredible,” says Baker. “He has so many different skills. He’s a talented engineer, a brilliant communicator. And he’s very committed, as we are, to capturing new sounds and having them fit, having them match the song and match the band. He helped us use our traditional sound palette but also what we are excited about now.”

Ultimately, what may have been seen as a slow start provided a bigger opportunity to Hey Rosetta! on SECOND SIGHT. The process brought the band to a more thoughtful, intentional, wide-open space. A place where they’ve always been at their best – one of joyful celebration. “You give and give and give” sings Baker on the album closer, Trish’s Song, a hymn-like wash of loveliness that notes, “and, now you need to breathe it in.”