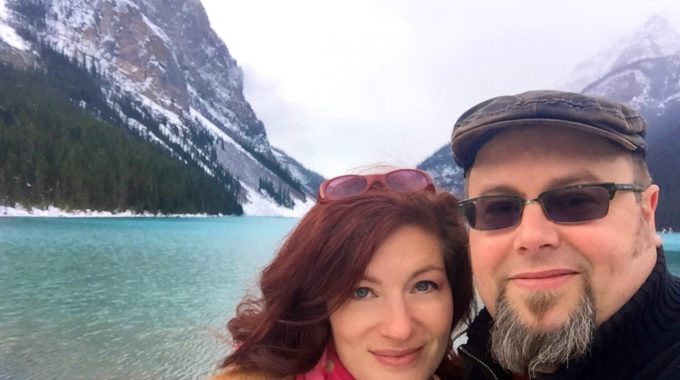 Infinitely More has a desire to share the love and light of God through song.

Husband and wife duo, Allison Lynn and Gerald Flemming, offer a fusion of folk, pop, jazz, hymns and worship that soothes the heart and ignites the soul. Their original songs and fresh interpretations of the classics will encourage and inspire both the seeker and the lifelong Christian. This full-time touring ministry travels over 15,000 KM annually, singing in churches of all sizes and denominations, as well as in unconventional and unexpected venues.

Within a year of their 2006 marriage, Allison and Gerald moved to Nashville, TN, to spend three years performing, studying with music greats, and writing songs. In that time, Allison recorded two solo Gospel CDs and worked with many Gaither Homecoming artists. Gerald wrote songs with Grammy winning and Hall of Fame songwriters, and worked with several Nashville publishers.

2013 also brought Infinitely More two nominations in the distinguished Words Awards, celebrating the best in Canadian Christian writing. Gerald received nominations for his original songs “You Are…" and “If They Knew It Was Me."

How The Light Gets In is currently nominated for an East Coast Music Award (ECMA)! The album has received a nomination for Gospel Recording of the Year.

Infinitely More has deep East Coast roots. Gerald's family is from Nova Scotia and New Brunswick, and Allison was born and raised in Newfoundland. The couple is now based in Ontario near their families, and tours regularly throughout the Eastern provinces. In 2014, Infinitely More spent the winter in St. Andrew's By-the-Sea, NB, as Musicians in Residence. Allison and Gerald will attend East Coast Music Week in April, 2015. From there, the duo will kick off their 5th annual East Coast Tour, singing in 5 provinces in 8 weeks.

Combining prodigious finger-style guitar and signature vocal harmonies, Allison and Gerald create music that is uplifting, Spirit-filled, and cross-generational. Their songs are rooted in Scripture and on the stories of all of our stumbling walks of faith. Whether performing for a secular music festival, a joyous church event, or an intimate house concert, Infinitely More is always entertaining, inspiring, and lots of fun.