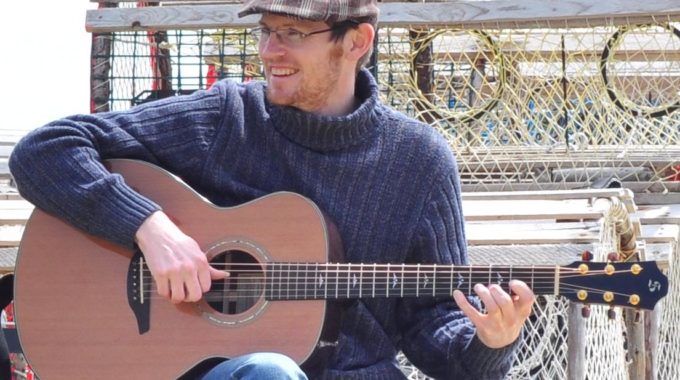 Jason MacDonald - Storm On The Way


Cape Breton singer-songwriter Jason MacDonald releases new full length recording "Got a Ways to Go" July 2012.
Jason MacDonald is an entertainer who reels listeners in with his dynamic acoustic musicianship and keeps them beguiled with his storytelling through the authentic songs he writes based on real-life experiences.
The home he makes with his wife and two young daughters in the close-knit community of Gabarus Lake, Cape Breton, both in and out of doors, is a source of songwriting inspiration that seemingly never goes dry. Jason draws on the stories of his family — including his grandparents — who had deep roots in the Gabarus Lake area, not to mention his own experiences fishing lobster, building houses, crafting furniture, growing Christmas trees, hosting a radio program, and, of course, writing songs and playing his music for fans from Mabou to Milwaukee.
He draws inspiration from his listeners as he travels a steady circuit that includes Cape Breton, mainland Nova Scotia, Prince Edward Island, New Brunswick and the New England states, not to mention the fellow singer-songwriters he interviews on his show “Meet The Music” on The Coast CKOA 89.7FM radio station.
But one thing his fans have been asking for lately is a new recording. Although Jason hasn’t slowed down musically, it’s been six years since he released his last CD “The Day,” which followed on the heels of his first recording “Leave My Mark” in 2002.
In July 2012 Jason released his third full length recording "Got a Ways to Go".
The respect the local musical community has for Jason is evident in the number of standout musicians who joined him on his long-awaited third recording — Adam Young on piano and accordion, Colin Grant on fiddle, Ryan MacNeil on whistle, Darren McMullen on bouzouki, mandolin, bass and banjo, Albert Lionais on trumpet, and Darrick MacLeod on drums.
The recording includes, fast-paced number “Storm on the Way,” which captures the mood on a lobster boat as those aboard hurry to haul their traps in the face of an impending storm. “That is the Sea,” a more reflective song that portrays the respect fishermen have for the sea. “Walked on Water” is a tune with a classic feel co-written with Buddy MacDonald that takes one back to a time when those around Gabarus Lake relied on the ice for travel and recreation. “Over Due” is a fun, jaunty number inspired by the thoughts and feelings Jason and his wife experienced awaiting the birth of their first daughter. In addition to 9 original songs, the recording has Jason's rendition of the old Scottish song "Loch Lomond".
To hear samples or purchase recording and also for contact information go to Jason’s website www.jasonmacdonald.com