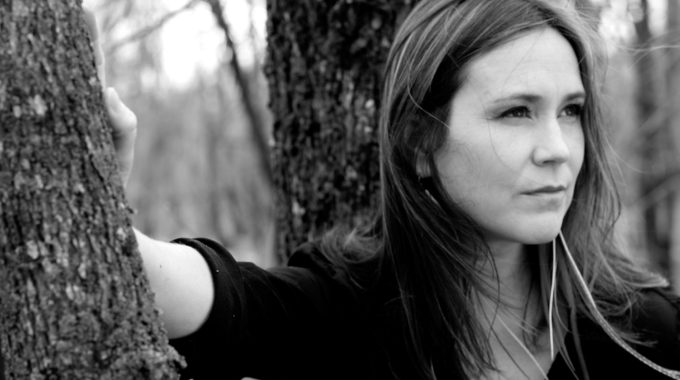 Jessica Rhaye is feeling comfortable in her own skin and its shows. Her latest release, Song In Me, embodies that ease with a collection of natural tunes that reflect the seasoned singer-songwriter’s maturing sense of herself and the world.

Song In Me is Jessica’s first collaboration with producer Dale Murray, who recorded its eight tracks in the living room of his country house in Oxford, Nova Scotia, to get the warm, live feel that Rhaye sought.

“It’s rawer sounding, it’s not as polished as my earlier albums,” she says. “I like that bit of grit - it’s more true.”

Inspired by the likes of John Denver and Ryan Adams, Jessica’s fifth full-length album shows the New Brunswick artist fully embracing her style. Unabashedly country on some tracks, she lets her rustic roots show as never before. Jessica, with her stunning vocals and lush melodies, has always moved easily between folk and Americana, but resisted the country label sometimes ascribed to her in the past. No more.

On her cover of Ken Tobias’s It’s Good to be Alive in the Country she lets her twang out on lyrics that could easily be describing her hometown, Hampton, New Brunswick, a postcard-pretty community of farms, fields and forests.

She has earned it over a career spanning 15 years, with a list of accolades that includes performing for Prince Charles, and being a Folk Alliance Official Showcase Artist in Memphis in 2010, the same year she played the Atlantic Canada House Stage at the Vancouver Winter Olympics and the East Coast Music Awards Concert Series in Sydney, N.S. She sang in Niger, Africa, at the Francophone Games, and toured the U.K. with Matt Andersen and Dave Gunning. A versatile live performer, she has graced stages big and small, including the Mariposa Folk Festival, a solo show in Hollywood, and a showcase at the Toronto International Film Festival.

Her songs have been featured on the CMT reality series Unstable and CBC Television’s Heartland. Jessica was also a featured vocalist in the theme song for Taste Buds on TVO Kids.

Her list of nominations includes a Canadian Folk Music Award and multiple East Coast Music Awards. She has won numerous Music New Brunswick Awards, and made the Canadian Music Week National Songwriting Finals in Toronto, as well the shortlist for several other Canadian and international songwriting competitions, including, the John Lennon Songwriting Contest.

Song In Me follows on the award-winning artists’s Far Gone Lullabies (2013), the multi-award nominated Good Things (2010) and her sophomore release, Short Stories (2006), which saw her nominated for a Canadian Folk Music Award for Contemporary Singer of the Year.

Jessica has always worked with other artists, including co-writes with Canadian gems Ron Sexsmith and Royal Wood, but Song In Me takes the collaboration to a new level. All songs but one - My World - are co-writes, the pairings lending the album an exciting dynamism, while hewing true to Jessica’s voice and style.

“I’d been coming up with a lot of melodies,” she says, “and I was looking for some fresh ideas for lyrics.” She reached out to some of the region’s best-known lyricists. Lovely Lady, a sassy co-write with Matt Andersen, sees Jessica getting into character as a vampish other woman, with Andersen adding super-sexy guitar solo to the recording. Other collaborators include Brent Mason, who contributed to three tracks, as well as Bill Preeper, Hillary Anne Ladd and Matt Epp, with Epp also making a guest appearance on the album. The album whose eight tracks features producer Dale Murray on guitars and keys, bassist Mark Geddes and drummer Mike Carroll.

Song In Me shows a more outward-looking artist at work, one moving beyond personal experience.  “These aren’t just love songs, these aren’t just me being in love, me having a good day,” Jessica says. “I watch the news, and see all these horrible things happening, and I can’t ignore them. I want to write about issues and people beyond my own experience.”

Sun Will Shine For You is a great example of this budding awareness. It was the result of a project with the United Way in which songwriters were paired with clients of that organization, tasked with telling their life stories through music. Rhaye worked with a young woman who had transcended a horrific family history of addiction and abuse. She couldn’t relate personally to the young woman’s travails, so she drew on her own maternal feelings and, with the help of Brent Mason, wrote it from the perspective of a mother giving advice to her young daughter.

“I feel like this album has a lot more to say,” Jessica says. As does she.