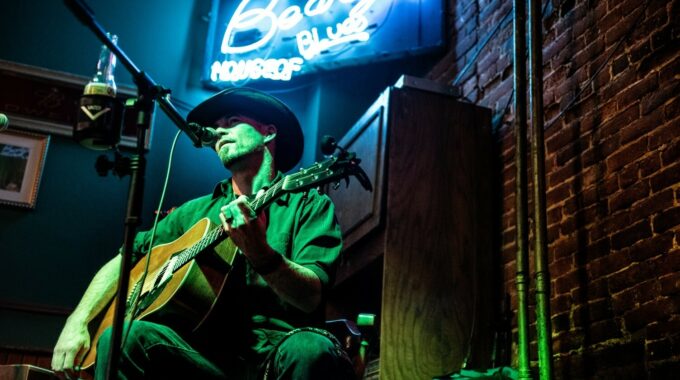 Jester J. Brown is a Canadian Recording Artist, acoustic fingerstyle and multi genre guitarist based in Annapolis Valley, Nova Scotia. An extremely flexible and versatile guitarist, JJB is known to play almost any genre, and this ability has given him the chance to share the stage with many of the top performers in the Maritime Provinces.

Being from a musical family, J was pretty much born with a guitar in his hands. He started playing a full size acoustic guitar at the age of 5 but his arms were too small to reach around the guitar, so he laid it down across his lap to play. By age 7 he was performing on stage and by 10 he was playing lead guitar.

A self taught fingerstyle guitarist, Jester J. has a very unique style and sound of his own. Started as a young flat picker inspired by the likes of Nova Scotia Great Hank Snow and fellow Canadian Smiley Bates. Later on, eager to hone his craft, following Certified Guitar Players the late great Chet Atkins CGP and Tommy Emmanuel CGP. There is one guitar influence truly recognizable in almost every song JJB performs - It's the distinctive styles of blues legend Mr. Stevie Ray Vaughan

After touring for many years as a lead guitarist, J. Brown decided it was time for the challenging and rewarding work of exploring his own musical projects and passions. With the support and assistance of his beautiful wife Romany Rivers, Jester J. Brown stepped into the spotlight and started booking solo gigs February 2019. JJB collaborated with and performed with some of the most talented musicians in the province, and performed solo across the province, from small pubs and bars to larger venues such as Phoenix Theatre in Saint John NB., and Atlantic Canada's Premier Venue The Carleton. Upon meeting George Wolf, Tommy Fisher and Cameron Palmer, the Jester J. Brown Band was formed and quickly gained a reputation in the local music industry, Nominated for Best Blues Artist/Band Halifax 2022 by the Coast Media and performing as the headlining band on opening night of Halifax Ribfest 2022 in front of thousands.

August 2022 The release of Jester J's debut single Mississippi River went straight to local radio stations in Nova Scotia and was soon after debuted on The East Coast Music Hour with Bill Roach on CBC Radio. Jester J. Brown has 3 more singles in the works with expected launch late 2022 / early 2023.

Jester J. Brown is a show you won't want to miss. Whether he is performing solo at your local pub for an up close and personal acoustic fingerstyle show, or Rockin' it out with the biggest sounding little trio, The Jester J. Brown Band, you are guaranteed to have an entertaining and enjoyable experience.