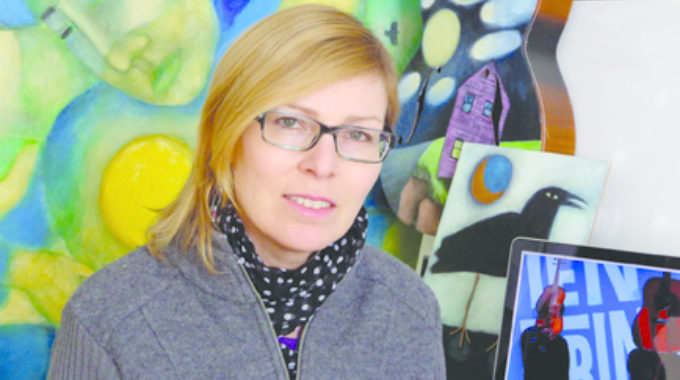 Visual artist Karen Gallant is a proud daughter of Rustico, Prince Edward Island. She is owner of StudioInk Gallery above Gallant's Clover Farm, where her "of another world" creations are on display. Karen also gives life to canvases in her farm house studio above the rolling hills of Hunter River.

Completely original in her style, Karen weaves her Acadian background influences using visual art imagery and graphic design. Her most recent project was the album artwork for Ten Strings And A Goat Skin's "Corbeau", nominated this year for Roots Traditional Group Recording of the Year. Other albums (artwork) include award winning "Le Coeur Haunté" and "Tri". Karen's first album covers were featured on two of Lennie Gallant's CDs.

A publisher's favourite, Karen's images have graced many a front page of the Buzz Entertainment Magazine, numerous Island book covers and appeared in national publications such as Style at Home Magazine and Canadian Architecture & Design Magazine.

Upon completing the Holland College Visual Communications Program in1989, Karen worked as a freelance graphic artist while pursuing her love for painting. Her artwork in group and solo shows has been exhibited throughout Atlantic Canada.

In 1996, with her sister-in-law, she operated the popular "Fishirts Company" participating in many shows including "The One of a Kind Show" in Toronto and the "Toronto Outdoor ART Exhibition".

Karen, in 1999, joined APM (Atlantic Properties Management) as Artistic Director until 2004. The "Sea Level Tees Clothing" line featured her fun & eclectic images. Those years saw some of her works super-sized, over one storey tall, adorning the exterior walls of the Confederation Centre of the Arts in the heart of Charlottetown.

As a budding art entrepreneur, 2005 saw Karen launching her own graphic design business- "StudioInk". SInce then she has worked with many new exciting clients including the "Shining Waters Family Fun Park". Karen used her illustration skills, combined with graphic design skills, to create the feeling of a park which was originally an empty field.

Through the conversion of a unique storage space above the third generation Gallant family general store, the "StudioInk Gallery" was born. The community grocery below had been founded by her grandfather in 1927 remains the heart of the community and seemed the natural next step for her career.

Artwork by Karen Gallant is now found in many private collections across the region and around the world.

Inspired by the elements and rhythm of the sea and Island landscape; its people, nature, and the local stories; the art inspires an instant feeling of having captured spirits between worlds; ours and theirs. Working in acrylics and mixed media (often using found objects) Karen Gallant's pieces reveal the mysterious spark at the heart of Island tales which have been passed down from generations of natural observers and legendary storytellers.