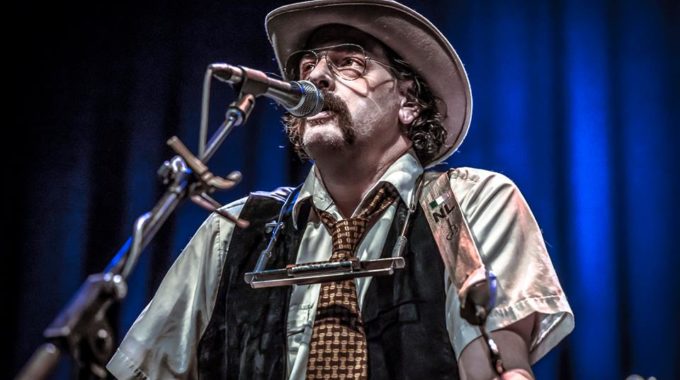 Very few Canadian musicians have had as fascinatingly diverse a career as Ken Tizzard. In over two decades as a professional musician, he has gone from plying his trade as the charismatic bassist in top Canadian rock bands The Watchmen and Thornley (he is featured on six gold and platinum records received numerous Juno nominations and MuchMusic Awards, and licensed songs to such TV shows as CSI and Fashion Television) to then emerging as an eloquent roots-based singer/songwriter and guitarist with a prolific solo career.

Wearing his rock 'n roll hat, Ken has toured internationally, appeared on The Tonight Show with Jay Leno, and played such major venues as The Air Canada Centre. When he puts on his cowboy hat, Tizzard can be spotted performing his original material, solo or with a band, for a loyal and growing audience in pubs, clubs and concert halls across Canada.

His new album, No Dark No Light, is Tizzard's fifth solo studio record since his 2006 debut, Quiet Storey House...an Introduction. A work of real emotional and musical resonance, No Dark No Light is emerging as his strongest work to date. It continues Ken's pattern of never repeating himself stylistically, as its acoustic country meets folk ambience is in sharp contrast to his previous album, 2012's The Goodness of Bad Intent.

"In the past, I've battled a lot with trying to find a character or niche with my music," Tizzard explains. "Now I realize that maybe I'm a guy who doesn't do the same thing twice. Every record I've done has moved me in a different direction and onto a different career path. That's fine and it's fun!” He views No Dark No Light as "the most cohesive record I've made. It almost feels like a concept record to me, and in the early stages I had songs sequenced in order that told a complete story." That approach was modified, but a thematic coherence remains.

There is a soul-baring lyrical honesty to the material on No Dark No Light. The majority of the songs are focused upon his own emotions and experiences or those of close friends, but, in true folk music tradition, he also creates characters and stories. He takes those songs just as seriously, striving to imbue them with real authenticity. "I see those songs as research pieces," says Ken. "Rather like a method actor working on a role, I really immerse myself in those themes, searching to find the real story."

Tizzard has now moved out of the dark and into the light, and his luminous music is ready to shine.