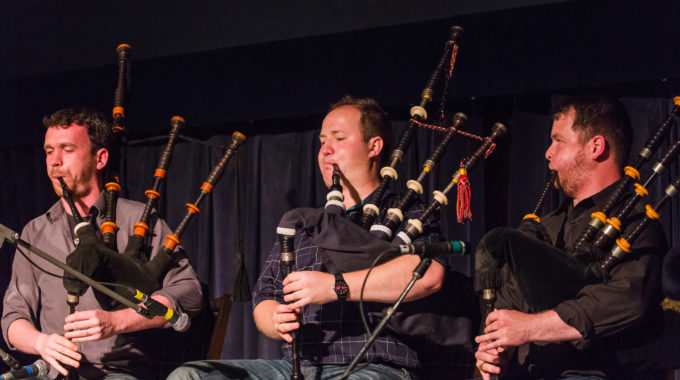 The formation of Nuallan was facilitated by the Gaelic College in the fall of 2012. The College wished to reinstate a piping group, following in the footsteps of the very successful Gaelic College Pipe Band. The purpose of the group is to represent, promote and explore the Gaelic style of piping brought to the Cape Breton, mainland Nova Scotia from the Highlands and Islands of Scotland some 200 years ago through performance, education and collaboration with other musicians, dancers and singers.

The group is composed of three Cape Breton pipers: Keith MacDonald, Kevin Dugas and Kenneth MacKenzie (along with others at times). Piano, guitar and drums provide accompaniment to 3 sets of highland bagpipes in a high energy set...you might even see a piper or two getting up for a step!

The Gaelic style of piping in Cape Breton was nourished and maintained to recent years through the playing of legendary players such as the Curries of Frenchvale, the Beatons of Mabou Coal Mines and the MacDonnells of Deepdale, among many others. This rich style of playing had a strong focus on the rhythm and musicality of the music. Nuallan’s members are known individually for their rhythmic, musical playing and bringing them together to celebrate the importance of the connection between piping, song and dance was a natural fit.

The Gaelic word Nuallan itself has two main meanings. It literally translates as the signature, vibrant droning sound of the Highland bagpipes. It can also describe the constant murmuring sound of the ocean. This provides this group with an additional link to its musical historical evolution since travelling across the Atlantic Ocean with the early Scottish settlers.