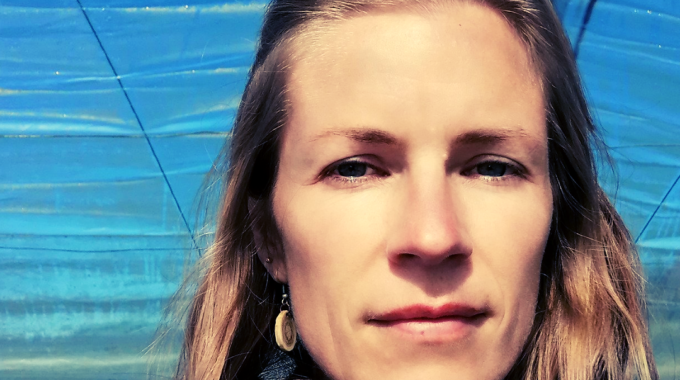 Newly emerging on the Nova Scotia music scene, Kim Joy Lake released her debut album, Flesh and Bone, in January of 2021. Drawing from an eclectic background, Kim Joy Lake’s alt-folk songs are catchy and contemplative, inviting listeners to pause and reflect on the threads tying us all together. Recorded at Ocean Floor Recording in Halifax during a global pandemic, Flesh and Bone is a celebration of connection and finding one’s place in the world. Co-produced with Charles Austin and Jesse Griffith, the album features Kim’s warm vocals, strong lyrics, and unique guitar style, alongside the unmatched talent of Jesse Griffith (The Basin Brothers and Wandarian), Gina Burgess (Gypsophlia and The Jerry Cans), Jordan Murphy (Walrus), Tony Wood (The Basin Brothers), Tom Helliwell (Jaunt), and Peter Gorman.

Growing up playing classical piano and singing in choirs in Ontario, Kim’s foray into song writing began later in life after moving to Yellowknife, NWT. Inspired by the local music scene and landscape of the far North, song writing became a way to process and express the beauty and sorrow of the human experience. Kim performed as a guitar player and vocalist with the Old Town Mondays and Fireweed in Yellowknife before moving to Nova Scotia in 2015.

Since moving to Nova Scotia, Kim has performed solo and as a duo with Jesse Griffith at North Along the Shore Jamboree, Music in Communities Kitchen Party, and other community gatherings. Now settled on the banks of the Avon River, she is inspired by the natural world and the resilience of the human spirit. She believes in the transformative power of music in bringing people together, sharing stories, and promoting healing. When not making music, Kim helps to coordinate the Full Circle Music Festival, is the mother to two young children, a partner to her husband and fellow musician Devin Lake (The Basin Brothers), a healthcare worker, and a volunteer with several not-for-profit organizations.

“Hearing a Kim Lake song is like meeting a deer in the woods, when you are in awe of their quiet wildness and vulnerability, and feel fortunate to have been in their world for a few moments.” - Terra Spencer

“For a debut artist to arrive as fully developed and steeped in songs of such staggering quality and commitment, Kim Lake is a rare talent. Prowess at every turn of phrase, nuanced vocal delivery, all carried by her uniquely and beautifully crafted guitar work, her skills set her apart in a class all her own. What an honour it is to be involved in making music of such caliber and joy, an inspiration for all, she reminds the listeners of everything good in a world littered with chaos.” - Jesse Griffith

“There is an exciting musical trend lately, coming from women who are starting to make records with some lived experiences already accumulated; women with kids and careers and interesting stories to share. Kim Lake adds her clear voice, lyrical wisdom and inventive tunes to a strong crew in this province, with a promising first release on the way.” - Kim Barlow