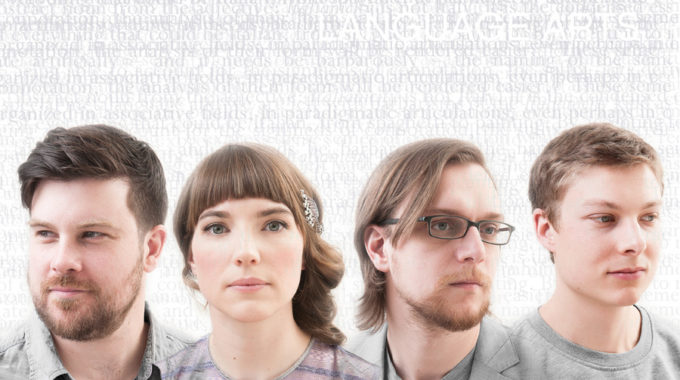 Wonderkind: 1. A feeling of surprise caused by a person, persons or things with beautiful, unexpected, unfamiliar, or

2. A curiosity or sense of caution or suspicion due to the benevolent disposition of a person.

Language Arts is the brainchild of Toronto-based guitarist, composer and singer Kristen Cudmore. “Language Arts’ sound is really a marriage between jazz schoolers and me, the classically trained one … I attract it without realizing it,” Cudmore says about her bandmates, drummer Neil MacIntosh, keyboardist Joel Visentin and current bassist Soren Nissen (Joe Ernewein played bass in the studio).

In short, ‘Wonderkind’ formally heralds the arrival of a powerful new Canadian voice, one squarely in the same league as other current iconoclastic female artists such as St. Vincent, tUnE-yArDs and Grimes.

On top of Cudmore’s entrancing vocals, the foundation of Language Arts’ approach is her guitar playing. Classically trained, from the school of the immortal Andres Segovia in both Canada and Germany, she has since electrified her skills. A wide range of effects now allows her to faithfully transfer to the stage a counterpoint of complex layers into an irresistible sound that is a reflection of her unique personality.

A Nova Scotia native previously based in Vancouver, Cudmore has been recording and performing coast to coast and in Europe with Language Arts since 2006, appearing at The Telus World Ski and Snowboard Festival in Whistler, Sled Island, NXNE, CMW, TD International Atlantic Jazz Festival, Halifax Pop Explosion, Jenseits von Millionen and at Peter Gabriel’s Real World Studios, among other notable shows.

NOW Magazine has described Language Arts as ”…classical guitar virtuosity, verbose lyrics and a singing style that’s part Joanna Newsom innocence and part gutsy, quick-fire rap,” while CBC Radio 3 has said of Cudmore, “She’s a warrior, and most of us are not.”

Such praise is sure to increase in the coming months as Language Arts takes to the road once again and audiences get to experience in person Cudmore’s boundless abilities and irresistible charm. Language Arts is simply one of the most compelling bands to emerge within Canada in recent memory, a rare combination of technical virtuosity and an indomitable creative spirit. Four years in the making, ‘Wonderkind’ brims with the joy of discovery and the wisdom of experience.