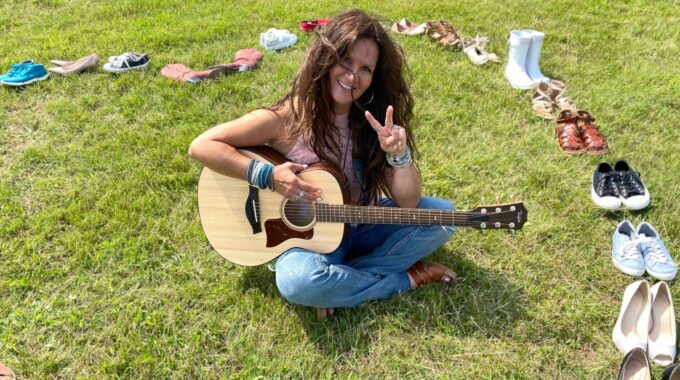 Linda Arseneault, originally from Moncton New Brunswick, began her career in 2000 with her family band, the Acadian formation La Famille Arseneault. This three-generation group which received two East Coast Music Award nominations (2007) and (2009) has performed across Canada for ten years and produced a total of four albums in which Linda was the lead singer/songwriter. Swing la Bottine published in 2002, Ça Swing Encore published in 2005, Un Bouilli Acadien published in 2007, and a completely original Christmas album Noël Avec La Famille Arseneault in 2009. In 2010, Linda experienced a marriage separation and with her parents who have aged, La Famille Arseneault comes to an end. Two months later, Linda decides that she still needs music in her life and so reigns a smaller version of the family group called Arseneault. The latter group continued to perform on stage for another four years until 2014 and produced one album called Riguedigue.

In 2015, Linda embarked on a solo career as a recording artist. It is a passion for her to write and compose her songs and decides she must continue her music. She entered the studio and in 2016 she launched her very first solo album Pas D'eau Dans Mon Vin. This album contains twelve original songs in French. It was then that she met her new love a lobster fisherman Jeff Parsons of Murray Corner and she left the city for a country life with new inspirations for writing. In 2018, her album My Green Rubber Boots made its appearance. This album contains six original songs in French and seven original English songs. It is with the song You Are My Everything from this last album that Linda begins to co-write several songs with Jeff who now becomes her husband.

In 2019, she released her EP album Reprise. This album contains four of her songs which were originally in English that she translated and recorded in French with the addition of a medley song of some of her songs from La Famille Arseneault. In 2020, Linda launched two versions of the same album entitled Redneck Girl and Redneck Girl (album français). These are the French and English versions of the same twelve original songs on two separate albums. She comes to us in 2021 with two versions of a new EP album Too Many Pairs Of Shoes and Trop De Paires De Souliers. With these albums, she keeps the same recipe and offers six original songs in French as well as in English on two separate EP albums.

Linda has been passionate about music since her childhood. With a musical family, she has been singing from a very young age and her father taught her how to play the guitar. She loves life and loves to write and sing songs that make the heart smile. She now divides her time between the sea, working on her husband Jeff's fishing boat, and music. The songs on her albums are heavily inspired by love and her country life. Listen to her music and discover the simplicity of love, joy, and passion.