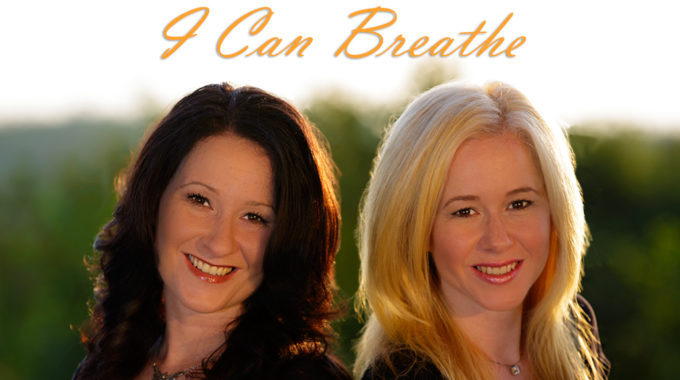 The Ryan Sisters have been inspiring people with their heartfelt performances for many years. Originally from Riverview, New Brunswick, the younger of the two, Lauretta, contracted Guillain Barré Syndrome when she was 20 years old. It’s a debilitating disorder that strikes the nervous system. In addition to paralyzing her entire body her weight spiraled down to 75 pounds. She couldn’t smile or swallow and family and friends were shocked to see the vibrant singer on a hospital bed hooked to several machines including a feeding tube. Doctors planned on putting Lauretta on a ventilator because she was having difficulty breathing on her own. That would mean having to undergo a surgical procedure known as a tracheotomy. An incision is made in the neck and a tube is inserted to create a new airway allowing her to breath. A negative side effect of a tracheotomy is severe damage to the throat and vocal chords and she would no longer be able to sing.

Lauretta was terrified of losing her singing voice and refused the procedure. Doctors agreed to have a respiratory team check on her frequently rather ventilating her. Lauretta was mentally determined to get better. She did and she made a miraculous recovery and was the fastest recovering Guillain Barré patient at the Nova Scotia Rehabilitation Centre. A doctor told her he felt singing saved her life. Her diaphragm was very strong and was the only muscle besides her heart that didn’t become paralyzed.

With nothing working in her body except her mind, Lauretta contributes her fast recovery to her faith, positivity, family support, visualizing being completely healed and seeing herself walking across the stage with a microphone in her hand. She also sang to her favorite music for many hours a day which helped to inspire her while keeping her positive during her recovery in the Nova Scotia Rehabilitation Centre. At this point the sisters decided to team up and pursue their dream with their music, as they realized that life is too short to let your dreams pass you by.

The Ryan Sisters were the opening act for Virgin Recording Artists, LEAHY, during their cross country tour promoting their # 1 album. They also sang in multiple East Coast Music Awards 75 Hour Non-Stop Jams captivating the audience with their powerful voices and contagious positive energy. They were promoted in Country Music News magazine as one of Canada’s hot new acts to watch for. They were also featured on the front page of the Life & Times section of the Moncton Times-Transcript newspaper and the front page of Riverview’s County Chronicle.

This dynamic duo was chosen to showcase their talent during Canadian Country Music Week in Hamilton, ON and were also chosen to showcase at the East Coast Music Awards 10th Anniversary in Halifax, NS. Anthony Ring, editor of Atlantic Gig, wrote that they were one of the highlights to catch at the ECMA's. They were thrilled to entertain to a full house and be the opening act for BMG Recording Artist and the ECMA Country Artist of the Year, JULIAN AUSTIN.

After taking a break from their music career for a few years, the sisters watched the movie “The Secret” and it changed their lives. The uplifting story of the “Miracle Man” brought Lauretta to tears as she was known as the “Miracle Child” and she had flashbacks of her illness and recovery. The similarities of their paralysis and recovery was overwhelming, as they could both only use their mind to visualize their complete recovery. The sisters instantly became inspired and they picked up a pen and paper and literally within ten minutes, their song “There’s A Secret” was born. That was the moment that they realized that their love of music never left their souls and they decided to pursue music once again.

The movie renewed their passion for music and the sisters decided to inspire others with their own lyrics and powerful messages that anything is possible if you believe, and that we all have unlimited power within us to create the life we’ve always dreamed of! The lyrics for “There’s A Secret” soon started to flow and their empowering music began its journey. The Ryan Sisters write soulful lyrics taken from their own life experiences and they want to share their music with the world.

The sisters have opened up for America's #1 Success Coach and best-selling author of the Chicken Soup For The Soul series, Jack Canfield, at the Success Symposium in Moncton, NB. They inspired the crowd before Jack took the stage, and he was very impressed with their performance. The sisters felt honoured that he told the audience that they were Chicken Soup for his soul! They also sang at the VIP reception for Dr. Wayne Dyer at his "I Can See Clearly Now" event in Halifax and were the opening act for Oprah’s Law of Attraction expert Michael Losier as well. The Ryan Sisters love to give back in their community and they have performed for charities such as “Night of the Arts” fundraiser for the Canadian Transplant Society in Dieppe, NB and for the Breast Cancer Action Nova Scotia fundraiser “Pink Spring”. The sisters love inspiring audiences every chance they get with their music!

Maria and Lauretta completed their full length CD entitled “I Can Breathe” which takes the listeners on an inspiring journey of songs written by the sisters on the power of love, forgiveness and living your best life. As an added bonus, their title track to the album, I Can Breathe, was co-written by Country superstar Johnny Reid and they sing emotional renditions of “Hallelujah”, “The Climb” and “Love Can Build A Bridge”. Their heartfelt music and powerful voices will touch the hearts and souls of all who listen.