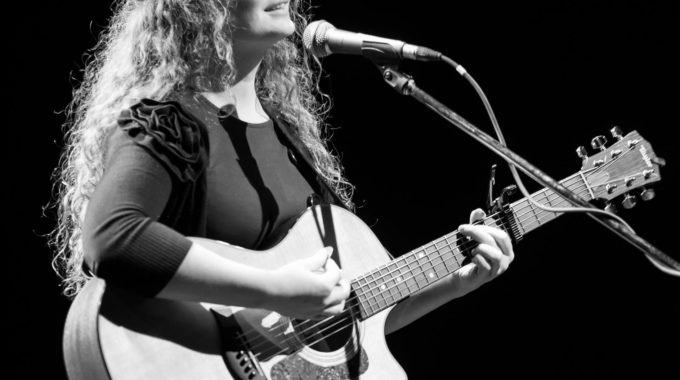 Meaghan Blanchard - When You Used To Call My Name
Website

Meaghan Blanchard, a vibrant red-headed singer-songwriter; grew up in the rolling hills of beautiful Prince Edward Island. Although a shy and quiet child, Meaghan gravitated towards music with a natural ability to hum up her own tunes at a very young age. No alarm clocks were needed at the Blanchard house, as Meaghan at four years old was known to be up and singing in her bed at 6am every morning. As she grew, Meaghan's natural vocal ability had her front and center of a number of community gatherings, children's choirs and kitchen parties in her home town of Hunter River. Although Meaghan's shyness followed her throughout her school years, she found comfort in logging away her hopes and dreams in small journals that she kept tucked into her desks.

Tired of letting her shyness get in the way of her musical dreams, Meaghan turned to her grandmother Glenda; a country singer who performed most weekends in the rural halls of PEI, for advice. Grammy Glenda's words still rings in her ears to this day; "Look for the person in the audience who is looking like they're having a bad day and sing to them; make em' smile. It'll take your fear away, and you never know what that could mean to somebody". It was by sitting side stage at her grandmother's performances that Meaghan also came to know and love some of the greatest female country singers of our time; Tammy Wynette, Emmylou Harris and Dolly Parton; huge influences on her music even to this day.

Meaghan Blanchard soon found her strength in writing songs and it wasn't long after she picked up her mother's acoustic guitar that she was off like a bullet; writing and performing all over Prince Edward Island, Canada and beyond.

Meaghan recorded "Changing Things", her first collection of songs at the age of 18 which garnered notable success across Canada recieving 4 MusicPEI awards and 2 ECMA nods. Meaghan's second recording in 2011 "Chasin' Lonely Again" was named Country Recording of the Year at the ECMA awards in Charlottetown, PEI.

She has performed for the Royal couple, William and Kate during their Royal Visit to PEI in the summer of 2011 and played 47 shows in 15 days at the Winter Olympics in Vancouver BC in 2010.
She has toured in Alberta, Manitoba, Saskatchewan and Ontario as well as select Maritime dates.

In January 2012 Meaghan appeared in the television special “The Songs Of Gene MacLellan” aired nationally on the CBC in Canada. She has played the Mariposa Folk Festival, Maritime Acoustic Festival, The Stan Rogers Folk Festival as well as, the Deep Roots Festival in Wolfville NS.