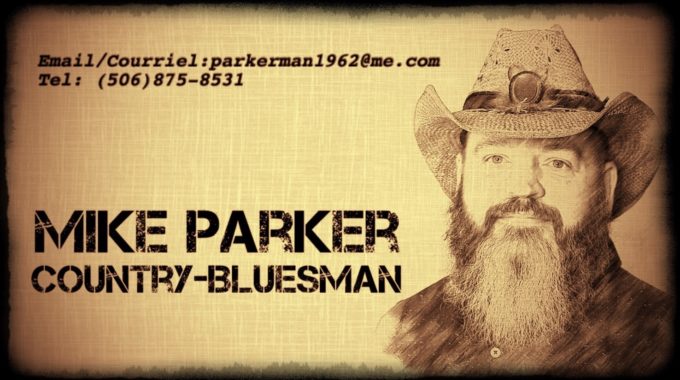 After an absence of over seven long years from the music scene due to illness Mike Parker is returning in greater shape than ever to his music. It was an opening act for the legendary known recording artist “Zachary Richard” from Louisiana of October 2017 in Campbellton, NB that puts back the confidence in this charming Country-Bluesman to return to his art and his passion which he had missed so much. It is also during this period that Mike forms a partnership with pioneer guitarist “Val Richard”. The two men form the duo named “Mike & Val” and are in production since 2017 in the greater Moncton area. The two experienced guitarist have a unique complexity and both share impressive guitar riffs exchanges together.

Mike Parker is an artist entirely devoted to his art. He his master of his two instruments. Firstly, his voice and secondly his electric guitar. He his also very comfortable in many musical styles and often he demonstrate it humbly in front of his audience young and/or old. One thing his certain he fits into all types of public.

He was gutsy enough to have produced from his own means three albums from 1996 to 2008.

Proof that he wanted to place himself firmly in the artistic domain. Which he succeeded plentifully. Mike mainly sold his albums on evenings he was performing « off-stage ». His last album “Mon P’tit Paradis” gives him a nomination for best francophone album of the year in 2009 with the East Coast Music Association (ECMA). This album makes his mark on the charts not only here in “Acadie” but throughout Franco Canada & a good part of Franco Europe. A man of many talents Mike specializes as much as a writer, guitarist , entertainer & singer. He his also ambassador to Country music & the Blues. As soon as one sees him on stage you can feel his presence and an unforgettable talent.

Since Sept 2009, Mike worked real hard to rehabilitate himself after a crippling cervical surgery to regain his independence. In order to be capable returning to his guitar and the live music scene. Something that he missed and loved so. Proof that he his determined more than ever to excel once again in the music industry of our beautiful country. Presently, he his working on the production of a new album to be released in Fall of 2019. This time this production will be in English! He his currently recording eleven original compositions in his style we have know him for which is “Country-Blues”. This long awaited disc will not only be loved by his courant fans but also be discovered by many new fans throughout Canada!!!

An original Country-Blues sound, an experienced artist, the joy and determination. This is what describes best our friend Mike. In 2019 four well known musicians from the greater Moncton area will be joining him. This group will be called “The ParkerMen”: Val Richard (guitar), Bernie De Leseleuc (bass), Brook Evans (harmonica) & Frank Hébert (drums).

Mike Parker/Country-Bluesman hopes you will find a place for him & his band in your schedule. So you can put him in the spotlight along with his talented & dynamic musicians “ The ParkerMen” during you seasonal summer concert series of 2019.

Since his tender age Mike has taken part of the music scene. As soon as he was 12 years of age. Thanks of his fathers encouragement himself a musician Mike participated to many live events. At 15 he plays bass for his dad’s band. Due to his natural talent he gains much experience from an early age. Mike also profited from touring in Ontario from 1988 to 1990. In this same year of 1990 we can see him touring in the Southern New Brunswick Country Music Circuit. From 1991 until 2005 he resided in Dalhousie Junction in Northern New Brunswick and since May 2005 resides in Dieppe where he worked on the production of his Franco disc “Mon P’tit Paradis” of the Country-Blues style. With this album he gets nominated for best francophone album of 2009 from the East Coast Music Association (ECMA). Mike is a passionate musician. He plays acoustic & electric guitar, the bass, the harmonica and slide guitar.

Album to be produced by Mike Parker

Currently being recorded to be released in the Fall of 2019

«Until The End of Time» composed of 11 original English compositions. An acoustic recording in the style of Country. Mike plays all instruments except the congas.