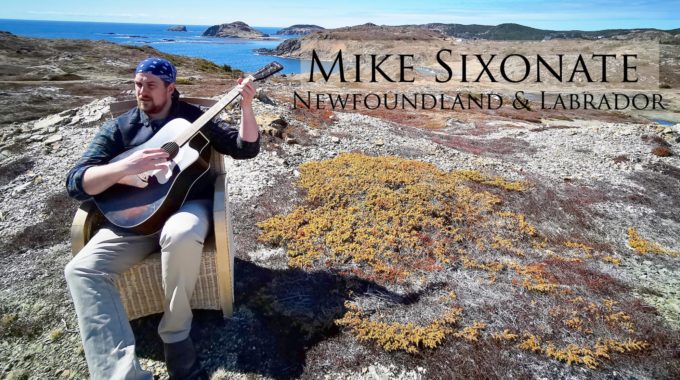 Mike Sixonate is more than just a musician, he is an all around entertainer who has found a perfect balance of song and story. His most recent show (2019) Tall Tales and heavy Gales has captivated people from all around the world and his reputation as a must see act is gaining steam across Canada and beyond.

Mike is a power house musician who plays 6 nights a week for a 15 week stretch in Twillingate Newfoundland. For the last three years he has played over 110 shows between the months of May to September. Heres what some folks have to say about His show

Mike was recommended to us by our good friend, Fergus O’Byrne, so when we came to Twillingate we made sure to see his show. He is a powerful vocalist, a tremendous story teller, and an all around great guy. If you get the chance to take in his show, please do, you wont be disappointed, although your face may hurt from laughing so much! Cheers Mike! Thanks for the show.

I recommend everything about his show. A very friendly atmosphere, Great music, funny tales that will have you laughing until you cry. A fantastic entertainer and talented musician that will leave you wanting more.

The best intimate live show (and night out) in the province. My wife and I saw Mike by chance initially, but immediately committed to making the 5+hour drive from St. John's to Twillingate to catch his show again less than two months later, this time bringing my parents - and they've been raving and beaming ever since.

5/5, 10/10, two enthusiastic thumbs up, gold star sticker - whatever the rating system, my family and I simply can't recommend Mike Sixonate (or the Captain's Pub) more highly.

Mike will be touring the following provinces in 2019/2020