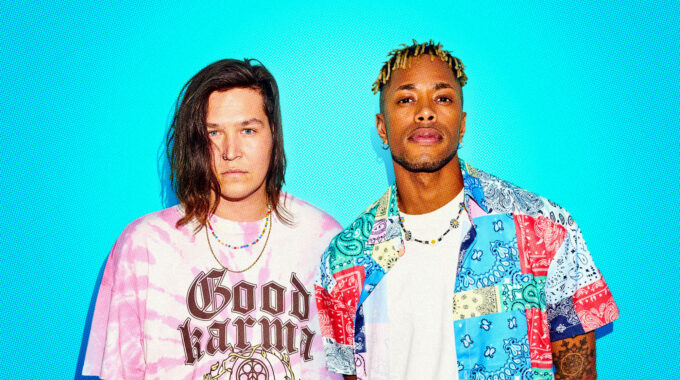 South Africa is 12,075 kilometers away from Neon Dreams’ hometown of Halifax, Nova Scotia, so when Frank Kadillac and Adrian Morris saw streaming numbers for their single “Life Without Fantasies” spike a year after its initial release, they were shocked to see that its life had been rejuvenated in a place they had never even visited before.

The song ended up getting so big that it went Platinum in South Africa, and the duo knew they needed to go visit their new fanbase. Neon Dreams spent the month of May playing 16 shows around the country, all of which sold out—some in as quickly as five minutes.

With the world being in lockdown for more than a year, Kadillac wasn’t sure if the shows would be awkward or even more energetic than usual. Fortunately, it was the latter. “It was like taking a shot of adrenaline to the heart. Every show was so loud from people yelling our lyrics back to us that it was hard for our sound guy to mix the show,” he recalls. “They showed us that our music really helped them through a hard time.”

The singer knows all about overcoming hardships—he endured abuse growing up, never stayed in one place long enough to make friends, and went to 10 different schools—but Kadillac persevered, and now uses music to help others find their way, too.

“My main goal has been to reach as many people as I can and spread a positive message,” he says. “I feel like I need to get out the message to people who are like me, because I don’t know anybody else who’s doing it.”

Neon Dreams has been his vessel since 2013. In the years that have followed, the duo has garnered Gold (and now Platinum) singles; accumulated tens of millions of streams; played sold out shows, and won numerous Canadian awards—including a coveted JUNO. But the project has always meant so much more to Kadillac than accolades, and that was affirmed during his time in South Africa.

The trip gave Kadillac and Morris hope during a dark time and a new type of confidence to go take on the rest of the world. They decided to pay it forward by becoming Goodwill Ambassadors for The Justice Desk—a non-profit organization that strives to teach youth about human rights at a young age and help them to defend those rights throughout their lives.

As the band spent time bonding with new fans, helping the community, and pouring their hearts out onstage, “Life Without Fantasies” continued soaring on South Africa’s viral chart. It peaked at No. 2 but couldn’t get past “Senzeni” by Mthandazo Gatya, and when Kadillac heard the track he understood why.

“It was the most beautiful song I’ve ever heard before,” he admits. “This guy's voice sounded like it was the earth singing.”

Neon Dreams wanted a South African artist featured on the single they were working on and knew Gatya was the perfect fit. Kadillac reached out, and the singer sent back his verse in one night. The result is “Say It Out Loud,” a song that incorporates the band’s signature alt-pop sound with Gatya’s Afro-pop influence and encourages listeners to manifest their desires by vocalizing them.

“I want to be the soundtrack to the next generation,” Kadillac proclaims. “I’m not writing for a bunch of cool kids. I’m writing for the kid sitting in the hallway eating lunch; the kid that has the perfect family but just doesn’t fit into it; the people who feel out of place.”

This message materialized on the band’s 2019 album Sweet Dream till Sunbeams, which comprises nine uplifting songs about not fitting in and overcoming adversity. While encouraging others to speak their truths, Kadillac’s also been tackling his own mental setbacks through meditation. In South Africa, he went on his most eye-opening retreat yet: The Blue Butterfly.

During his time there, the singer-songwriter noticed how insects all try to emulate a majestic butterfly. “Just from this simple observation, and many others, I realize we are all chasing a blue butterfly,” he explains. “That butterfly is your dreams, hope, love, redemption, and so many other things. And at the same time we’re doing a little dance under the sun.”

“This helped me to stop overthinking,” he continues. “I’m so at peace with life now. I’m doing my dance and if someone’s dancing my way and I don’t want to be a part of it I’ll let them pass by and keep dancing my way to the end of the road.”

For Neon Dreams, that road sees them continuing to inspire with new music before eventually hitting the road again. In the meantime, Kadillac and Morris are focusing on one of their favorite things about being in a band: connecting with fans around the world on a more personal level.