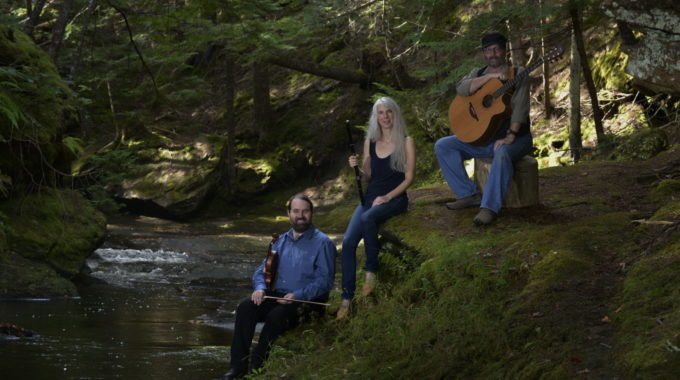 Papilio is a neo-traditional acoustic trio based in Halifax, Nova Scotia. Join them on a musical tour through the cultures of Ireland, Scotland, Brittany (France), Spain, Cape Breton, Quebec, Scandinavia, the Balkans, and uncharted lands beyond. With fiddle, flutes, vocals and guitar, Papilio renders a mix of international instrumentals, original compositions, and folk songs with their own distinctive creative twist.

Papilio’s debut album, First Flight, engineered by Glenn Coolen and John Adams, was nominated for an East Coast Music Award and a Nova Scotia Music Award in 2014. The trio has performed at the Stan Rogers Folk Festival, the Celtic Colours International Festival, the East Coast Music Awards, Nova Scotia Music Week, the Halifax Celtic Festival, and at concert venues and dance halls across the Maritimes. Their second album, Sociable Butterflies, was recorded at Stonehouse Sound and released in 2018.

Papilio’s “First Flight” has just been nominated for Traditional Roots Music Album of the year by Music Nova Scotia. First Flight was also nominated in the category of Traditional Instrumental Recording of the Year at the 2014 East Coast Music Awards. It is easy to understand why. Jennifer Publicover, Anthony Rissesco and Phil Shappert have recorded an exceptional performance with delicate treatment of each piece. - Michael Trenholme, East Coast Kitchen Party

Anthony Rissesco is a versatile violin player and teacher who tours regularly with singer-songwriter Lennie Gallant and with roots-rock band Pogey. He is also a member of the Halifax band The Gig Dogs. As a music student at Dalhousie University, Anthony studied classical violin under Phillippe Djokic. He has won fiddle competitions throughout Canada, including the Maritime Fiddle Championship. In 1990, he came third in the prestigious Canadian Open in Shelburne Ontario, and he was chosen to represent Nova Scotia at the Grand Masters Competition in Ottawa for six consecutive years. Anthony has played with Symphony Nova Scotia, Bruce Guthro, Cyril MacPhee, Anne Murray, Merrimac, Lennie Gallant, Pogey, and Peggy Seeger.
www.anthonyrissesco.com/

Jennifer Publicover leads a multi-faceted life performing on both the modern orchestral flute and wooden Irish flute. She earned her Master's degree in flute performance at the University of Toronto and her B.Mus at Mount Allison. As a collaborator in traditional music forms, she also works with harpist Alys Howe and many other artists. In her alter ego as a classical flutist, she has freelanced for Symphony Nova Scotia, the Stadacona Band (including as a featured soloist with Scott Macmillan), and the Charlottetown Festival Orchestra. Recently she completed a second master’s degree, with a thesis on the use of music as an environmental education tool, based on interviews with prominent Canadian songwriters. A respected teacher, she is also the founder and director of the Halifax Institute of Traditional and Early Music. Visit: www.jenniferpublicover.com/

Phil Schappert, or Dr. Phil, as his students knew him, is also a PhD entomologist/botanist who has written books about plant/insect interactions (FYI, Papilio is a genus of swallowtail butterflies, represented in Nova Scotia by Papilio canadensis, the Canadian Tiger Swallowtail). Introduced to Irish and Scottish traditional music by Don Ross (and Joel Shore, his fiddle-playing PhD supervisor), Phil has developed a particular fondness for the music of Brittany, celtic Spain and Scandinavia. He plays fingerstyle guitar, and plays instruments made by Nova Scotia luthier Russel Crosby and Irish luthier George Lowden. Phil has been a member of the neo-Celtic ensemble Fancy's Flight, and has played in neo-celtic/jazz/folk/trad bands in Toronto and Austin, Texas. http://philschappert.com/