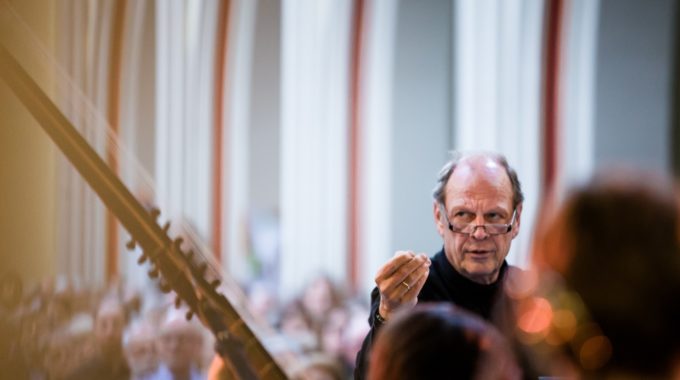 Paul Halley, M.A. Cantab., FRCO, ARCT, is a Grammy Award-winning composer, choral conductor, and organist. He is Director of Music of The University of King’s College Chapel Choir and of The Cathedral Church of All Saints in Halifax, Nova Scotia. A recording of recent choral works by Paul Halley, entitled In The Wide Awe And Wisdom, was released in the fall of 2017 on the Pelagosmusic label, and has been named a finalist for the Lieutenant Governor of Nova Scotia Masterworks Award 2018.


Born in Romford, England, Paul was raised in Ottawa, receiving his early musical training with The Men and Boys Choir of St. Matthew’s Anglican Church and, at sixteen, was made an Associate of the Royal Conservatory of Toronto. Awarded the organ scholarship to Trinity College, Cambridge, Paul received his M.A. with prizes in composition and performance and was made a Fellow of the Royal College of Organists. Following four years post-graduate work as a church musician and English teacher in Jamaica, Montreal, and Victoria (BC), he was appointed to a twelve-year term as Organist and Choirmaster at The Cathedral of St. John the Divine in New York City. During this time, Paul collaborated with The Paul Winter Consort and contributed as principal composer and keyboardist on multiple Grammy-winning recordings.
Settling in rural Connecticut in 1989, Paul founded the choirs Chorus Angelicus and Gaudeamus and, while Director of Music at Trinity Episcopal Church, Torrington, CT, he inaugurated a choral and organ scholar program in conjunction with nearby Yale University. Paul relocated to Nova Scotia in 2007 to become Director of Music at the University of King’s College Halifax and developed tours, recordings, and the concert series, “King’s at the Cathedral” to showcase performances of the choir. The choir's release Let Us Keep The Feast won the Outstanding Choral Recording Award from Choral Canada in 2014. In 2015, Paul was appointed Director of Music at The Cathedral Church of All Saints, a position which he holds in conjunction with his work at King’s.
Paul’s compositions are distributed by the music publisher, Pelagos Incorporated, and his work has been commissioned and licensed by Sony Entertainment, The Boston Pops Orchestra, CBC, The Toronto Symphony, and Canadian Brass.
Paul and his wife live on the South Shore of Nova Scotia where they enjoy exploring the waters of Mahone Bay in a traditional Cape Cod catboat which rejoices in the name, “Magnificat”.