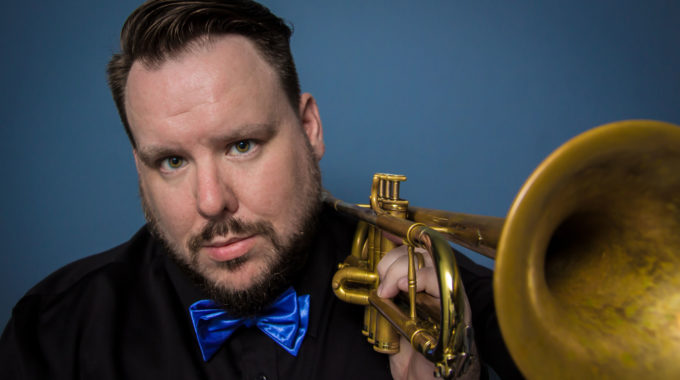 Paul St-Amand is a trumpeter, vocalist, and composer based in Halifax, Nova Scotia, Canada. Packing a sweet sound and a lyrical singing voice, he’s become a mainstay of the city’s live music scene. His Soul Trio plays weekly at the South End’s Coburg Social, and he’s a member of the popular salsa band Son Latino. He also performs around town with many of the region’s finest jazz, soul, pop, rock, and folk musicians.

In 2019 Paul played a series of sold-out tributes to Chet Baker at venues like The Music Room, The Carleton, Winegrunt, and the Kingsburg Concert Series. Leading a quintet called Blue Spirits, he received a Music Nova Scotia Award nomination for 2017 Jazz Recording of the Year for the album Liquid Courage. As a guest artist he’s recorded with The Stanfields, Beauts, Corey Isenor, Arsoniste, Michael Almasy, and Roxy & The Underground Soul Sound. He was a longtime member of Unidentified Funk Object, with whom he received an ECMA nomination for Funk/Soul Recording of the Year.

Also an accomplished classical player, Paul is a founding member of the Bedford Brass Quintet. The ensemble has twice been voted among the top three classical artists in Halifax by readers of The Coast. Paul has organized eight Harmony & Hope charity concerts featuring choir and brass, raising over $22,000 for the Canadian Cancer Society. In 2018, his original composition The Eagle and Shield was chosen as Dalhousie University’s official bicentennial anthem.

MAR '19 - Sold out performance of Let's Get Lost: A Tribute to Chet Baker at The Music Room, Halifax

“St-Amand takes centre stage…with creative melodies that are both at once original and steeped in history.” (The East)

“Liquid Courage is clear and taut, when it’s not gleefully cacophonous. This is a quartet with a sense of humour, which is nice.” (The Coast)