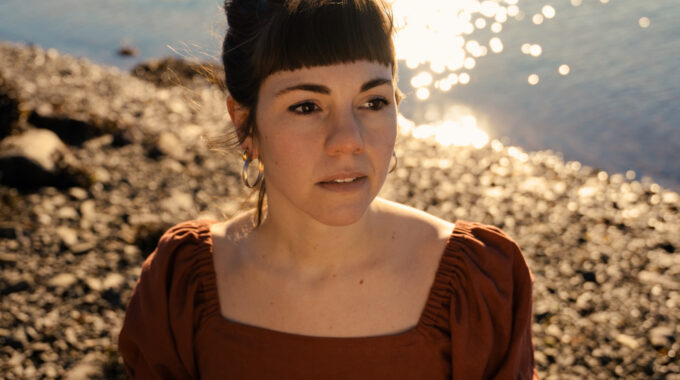 Blue Lobelia is the solo project of Kjipuktuk (Halifax) based multi-instrumentalist, Rachel Bruch. She blends classical and indie-folk influence to create ethereal string arrangements under a rich soprano voice. Blue Lobelia's debut album Perennial (2016) is “…an ebb and flow of sound — sometimes a sparkling brook, sometimes a tidal wave...". The release was supported by three cross-province tours, with radio play on CBC and showcases at Maritime festivals such as Evolve, Paddlefest, Flourish, and NSMW. In 2019, Bruch released her first full-length album, Beneath all Bloom (2019), named "2019’s Best Album" by The Coast. Deeply steeped in themes of dreamscape and motherhood, it has been described as the auditory equivalent of, ‘walking through an enchanted forest’ or ‘a daydream you can dance to’. A peak career moment took place just weeks before the first lockdown, performing alongside Dave Gunning, Owen Steel, and Jennah Barry as part of Winter Warmer's 2020 Songwriters Circle. Throughout the pandemic, Blue Lobelia has been gently writing and recording new music, including the album, Folk Songs & Broadside Ballads released by Big Turnip Records (2021) and the single and music video, Holding on must always lead to letting go (2021). In May 2022 she released her latest album, 'Resilient Moon' which de-centers the use of a loop pedal in order to create space for folk-centric guitar playing and unfettered string arrangements. Resilient Moon was warmly received with radio play on CBC's East Coast Music Hour, a sold out release show in Halifax and a MNS nomination for 'Best Folk/Roots Recording of the Year'.